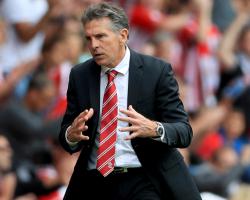 Saints are bidding to register their seventh consecutive shut-out at St Mary's, with their defence unbeaten since a 2-1 defeat to Arsenal on September 10.

Their powers of resilience mean Puel's men are now just two clean sheets short of matching a club record that stretches back to 1922, when Southampton managed eight in a row.

Two goalless draws, however, against Hapoel Be'er Sheva in the Europa League and defending Premier League champions Leicester, have left Puel more concerned about sealing a win this weekend.

"I prefer to lose this record and win the game, it's not important for me," Puel said.

"Of course it's interesting because you show you are strong and with a good solidarity but most important is to win the game.

"If you can score two or three goals it would be fantastic, even if you concede one or two goals

It is not a problem for me."

Burnley have failed to score in any of their three away matches this term while Southampton currently boast the third best defensive record in the top flight.

"It's not just the defence, for me it's important to consider it as the work of all the team - midfield and offensive players also," Puel said.

"It's also our style of play, we often have the ball and it's easier to defend with good control of the game

I prefer my team to play good football.

"When they have the ball there is not a possibility for the opponent to have chances."

Sunday's game kicks off a hectic period for Southampton, who will play seven games in three competitions over 22 days.

After Burnley, they face Inter Milan in a mouth-watering clash at the San Siro, before tough tests against Manchester City and Chelsea, either side of an EFL Cup fourth-round tie against Sunderland

They then take on Inter Milan in the reverse fixture and Hull before the international break.

Puel admits he is ready to rotate his squad, saying: "The first and most important thing now is Burnley

"After we can speak about Inter Milan

Inter Milan is another competition, it is not just one game, it is a mini-championship to qualify from the group.

"It's important to keep this in mind and accept all the time to change the team and keep the good level."

Full-backs Ryan Bertrand and Cedric are both unavailable to face Burnley as they recover from hamstring and ankle injuries respectively.

Shane Long is close to a return, also from a hamstring problem, while summer signing Sofiane Boufal has resumed full training after injuring his knee in May but is still regaining match sharpness.