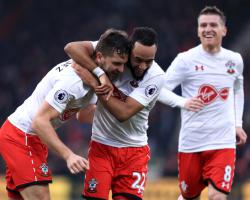 Rodriguez bagged his first league goals on the road since March 2014 in Sunday's 3-1 win at Dean Court, ending Saints' five-match barren run away from home in the top-flight.

The 27-year-old striker finally looks ready to draw a line under two years plagued by knee and foot injuries, leaving defender Van Dijk to tip the ex-Burnley man for a fruitful 2017.

Charlie Austin will miss three months with shoulder trouble, and Van Dijk believes that paves the way for Rodriguez to step into the breach.

"I'm very pleased for Jay and I told him it was well deserved," said Van Dijk of Rodriguez's brace at Dean Court.

"He's a great guy, so it's great to see him right up there again now and hopefully he can keep it going after Christmas."

A serious knee ligament injury curtailed Rodriguez's hopes of heading to the World Cup with England two years ago, and the Saints forward has only now managed to work back to full sharpness.

New manager Claude Puel would have let Rodriguez head out on loan at the start of the campaign but he has fought his way back into selection contention instead.

And Van Dijk revealed the hard-working striker was even among the side's top physical performers in their 1-0 league win over Middlesbrough at St Mary's on December 11.

"He has worked so hard, and it was the same in the game against Middlesbrough," Van Dijk told Southampton's official club website.

"I saw the numbers after that game and he had a lot of high-speed running."

Southampton will now host Tottenham on December 28, with Van Dijk admitting the squad can enjoy Christmas - but must quickly kick back into gear to face former Saints manager Mauricio Pochettino's Spurs.

"It's a massive win just before Christmas," said Van Dijk.

"We deserved the win and we know their game plan and what they're all about.

"We prepared well and in the second half we controlled the game, we weren't in trouble.

"At half-time we spoke a lot about coming aggressive out of the dressing room, making sure we keep the ball and playing through their press.

"Sometimes they press kamikaze when they go and they go, so we had to play through them and we did that very well.

"This win gives us an extra good feeling going into Christmas.

"Now it's time to relax a bit, it's been busy the last month, so we need to get our rest and get ready for Spurs."