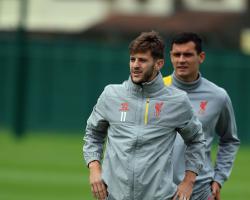 Southampton V Liverpool - view commentary, squad, and statistics of the game live.Koeman ignores returning ex-SaintsRonald Koeman has no interest in the reception Adam Lallana, Rickie Lambert and Dejan Lovren will receive on their St Mary's return as the Southampton manager's sole focus is on beating Liverpool.The trio were key protagonists in last summer's unparalleled talent drain from the Saints as they swapped the south coast for Merseyside at a reported combined cost of B#49million.Lallana, Lambert and Lovren have enjoyed differing levels of success since moving to Anfield and will receive receptions of varying warmth upon their first visit to Southampton since departing.The spectre of those returns have understandably dominated the build-up to Sunday's match, but it is not something Koeman is interested in."It's not my question, my question is to prepare the team for the Sunday game," the Saints boss said

"I don't talk about players who are coming back to the club where they played last season, because then I can talk every week about a player who comes back to Southampton."Lallana is a very good player, doing well in Liverpool

He chose to change the club after a good opportunity and nothing else."It is Southampton against Liverpool, not Southampton against some players who played last season for Southampton."Friday's pre-match press conference saw Koeman come closer than any time during his Saints reign to losing his cool as a journalist peppered him with questions about the returning triumvirate.The Dutchman told the reporter to "ask me about Southampton" and, as he became increasingly irked, asked: "You're the agent of Lovren and Lallana? Why that kind of questions all the time?"After eight questions on the subject, the head of media intervened in a bid to move matters onto Southampton's current squad."You think I am thinking about losing a game? No way," Koeman said

"I am thinking of winning the game

I am not negative thinking."I'm surprised they have four points less than we have and to come closer to us they have to win

If they don't win, they don't come closer."Southampton's chances of keeping Liverpool at bay are boosted by the return of Morgan Schneiderlin, Shane Long and Matt Targett on Sunday.There will still be a number of absentees at St Mary's, though, with the suspended Ryan Bertrand joining Toby Alderweireld, Emmanuel Mayuka and Jay Rodriguez on the sidelines.The latter has not played for 321 days after rupturing an anterior cruciate ligament last season, with some talk of a March return."It's a long way now for Jay and if it happens in March we are very happy," Koeman said

"If it happens in April we will see but at the moment not because he needs more time."Liverpool manager Brendan Rodgers has criticised Mario Balotelli's work rate and told him to step up his contribution.Rodgers gave his full backing to striker Balotelli over the penalty furore which blew up in the 1-0 win over Besiktas in the Europa League.He supported the Italy international stepping in front of Jordan Henderson, captain on the night and designated pre-match taker, even if it looked unseemly at the time.But when it came to Balotelli's overall effort during his substitute appearance, Rodgers was unimpressed.Rodgers responded "No, not really no", when asked if he was satisfied with the 24-year-old's stint against the Turkish side, which lasted half an hour.Rodgers said: "We need to ensure that whatever level of the game we are playing at we have everyone working as a team and once we got the penalty he stops working."So he needs to improve on that facet of his game to play in his position, rather than standing on the side of the football field."Rodgers, speaking to national newspapers, said of Balotelli: "He has contributed against Besiktas, he has got the penalty and scored the goal but that is what he is paid to do."He needs to keep that efficiency in his game and show that he can affect the team whether he is asked to play from the bench or from the start

In a different country and a different style of football that (goal) would be all that matters but in this team there is more to it than that."Injured captain Steven Gerrard, as a guest television pundit, called Balotelli "mischievous" and "disrespectful" for taking on penalty duties.Rodgers said Balotelli - who has scored 27 out of 29 from the spot in his career - was following the long-established order agreed earlier in the season."There has probably been a lot more of a drama been made out of it than it actually was," said the Reds boss."With the players who were initially on the pitch last night Jordan was our nominated taker."But if Jordan and Steven and Mario are on the pitch at the same time we would normally have Steven and Mario as the penalty-takers."History shows he (Balotelli) has scored nearly 30 penalties in big games so he is an outstanding penalty-taker, but none of them were on (at the start) so you have to nominate someone."Jordan was happy enough to take it but he gave it to Mario."Raheem Sterling is pushing for a start after his successful return from a foot injury in midweek but Steven Gerrard misses out again with a hamstring problem