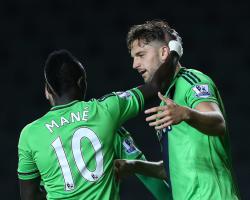 Rodriguez's goals were his first domestically in almost 18 months, having only recently returned from a lengthy lay-off with a ruptured anterior cruciate ligament

He netted for the first time since his comeback against Danish outfit Midtjylland in the Europa League last month but his efforts on Wednesday night were his first strikes in English competition since a Premier League double against Newcastle on March 29, 2014.

The 26-year-old's brace, his second from the penalty spot, came either side of Mane's double while Long grabbed his two later in the second half - making it the heaviest defeat in MK Dons' short history

They had actually started confidently, knocking the ball about well

But a mis-placed pass was pounced on by Rodriguez, who punished the Championship side in the fifth minute

It arrived after 10 minutes when Mane went past his man down the right side of the box and clipped his finish over the advancing Martin.

The hosts struggled to get a foothold in the game

Their only shots on target in the first half came from Carl Baker and Daniel Powell but both were easily fielded by goalkeeper Maarten Stekelenburg.

Southampton looked dangerous every time they attacked and they scored again in the 25th minute when Long crossed for Mane, who cut back on to his left foot and curled his shot into the bottom corner from near the penalty spot.

Summer signing Juanmi was denied a goal on his first start as Martin helped his shot over the crossbar and the Premier League team went into half-time 3-0 ahead.

The Dons began the second half in the worst possible way when McFadzean brought down Long, allowing Rodriguez to score from the spot after 48 minutes.