Southampton striker Charlie Austin- I always back myself to score 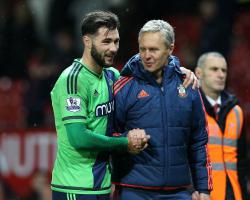 Austin wrote another chapter in his journey from bricklayer to Barclays Premier League star on Saturday when he scored the winner on debut for Southampton at Manchester United.

"Whenever I come on the pitch I always try to score and luckily enough the chance came to me and I was delighted to put it away," the 26-year-old said

Crazy just about sums up Austin's professional career to date.

Six years ago, Austin used to lay bricks in the day and turn out for Poole Town at night in the Wessex League, where he was spotted by Swindon before he moved on to Burnley and then QPR.

Austin was a big hit at Rangers, scoring 18 goals in his maiden Premier League campaign, which led to an England call-up.

Then, all of a sudden, interest in the frontman started to dry up

No top-flight club saw fit to meet QPR's ÃÂ£15million asking price and Austin started the season playing away to Charlton, rather than Chelsea.

Sullivan later apologised for the comment after Austin threatened legal action, branding the claims of the Hammers co-chairman as an "outrageous slur".

I just do what I can do and that's that," Austin said when reminded of the criticism he had received.

"I just let people do the talking

I do what I can and I can only control the controllables and coming on the pitch and scoring the winner is something I can control.

"Times change but that's behind me now and I'm all about concentrating on Southampton and playing in the Premier League because this is where I want to be."

Sullivan seemed to cast doubt on Austin's credentials by pointing out that "a few" (three) of the striker's 18 goals came from the penalty spot during his maiden season in the Premier League.

The forward insists he never doubted his ability to perform at the very top of the game, however.

"I always back myself to score, wherever I go," he said.

"For any striker moving in January is tough and to get that first goal is very important so I'm just delighted to get it so early on.

When asked why no other club had made a serious bid to sign him this month when QPR's asking price dropped to ÃÂ£4million, Austin said: "I don't know whether I was credited enough for what I did at QPR.

"Maybe that was just it but now I have come to a club like Southampton they are only going one way and I want to be part of that journey."

Austin is refusing to start contemplating whether he can make a late surge into the England squad again.

"The Euros are at the back of my mind," he said.

"If it happens, it happens, but at the moment I just want to continue performing for Southampton."