Southampton qualify for Europe thanks to victory over Crystal Palace 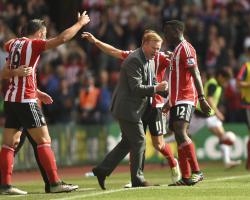 Julian Speroni's record-equalling appearance for Palace proved a disappointing one after his error led to Sadio Mane scoring Southampton's opening goal, and thereafter Graziano Pelle, Ryan Bertrand and Steven Davis added further goals to secure the comfortable victory that takes them up to fifth place

Jason Puncheon notched for the Eagles.

Manchester United can yet overtake Southampton by defeating Bournemouth in their rearranged fixture, but the guarantee of European competition unquestionably represents success for Ronald Koeman's team.

In preparation for next week's FA Cup final against Manchester United, Alan Pardew rested Wayne Hennessey, Scott Dann, Wilfried Zaha, Yohan Cabaye, Yannick Bolasie and Connor Wickham, the players who this season have represented the core of his team.

The Palace manager had spoken in the week of having half an eye on their fixture at Wembley, and also of selecting Speroni on sentiment to allow him to level John Jackson's club record, for a goalkeeper, of 388 appearances in all competitions.

His starting XI, however, suggested he had both eyes on next week, and similar could be said for Speroni when his error gifted full-strength Southampton the lead.

Dwight Gayle had already threatened when forcing a save from Fraser Forster while shooting from a half-chance, but the hosts created further chances when Shane Long had headed over, and Virgil van Dijk had unexpectedly curled a free-kick against the top of the crossbar.

Amid Palace's superior intensity, Southampton made greater use of the ball, but there was little predicting the 43rd-minute goal from Mane that highlighted the collective absence of Hennessey and Dann.

When Bertrand crossed into the penalty area, Speroni leapt over Damien Delaney's attempted clearance to unconvincingly punch the ball to Mane, fall over his team-mate, and allow the forward to routinely finish into a near open goal.

With Southampton pursuing a fifth-placed finish and Palace's priority unquestionably being the cup, it appeared likely they would soon extend their lead, and so 16 minutes into the second half it proved

Cuco Martina sent a right-wing cross into the area and substitute Pelle - making what may yet prove to be his last appearance for the club - leapt to powerfully head beyond Speroni and into the back of the net before running to celebrate with reserve keeper Kelvin Davis, whose Southampton testimonial is imminent.

To their credit, Palace's response was almost instantaneous

Forster's ineffective punch led to Puncheon controlling possession from close range in the 64th minute before, with as fine a finish as he will have ever produced, powerfully curling a left-footed shot into the top left corner and beyond Forster's considerable reach.

Long had just headed over the crossbar when the athletic Mane launched another attack, and was brought down on the edge of the area between Adrian Mariappa and Delaney.

The challenge appeared to take place outside the area, before the forward fell inside, but referee Michael Oliver pointed to the penalty spot, and Bertrand placed the 75th-minute penalty beyond Speroni and into the top left.

Victory effectively secured, Southampton played with the freedom that comes on the last day of the season with the knowledge European football has been secured

Davis add their fourth and final goal with a powerful, low, close-range finish in the 87th minute when Palace, their minds elsewhere, again failed to clear another cross, improving their goal difference and safeguarding against results elsewhere.