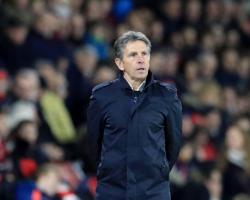 After a relentless period of domestic, European and international football, Saints boss Claude Puel will schedule time for rest and recuperation ahead of Saints' next game against Tottenham on December 28.

"After this game, there is three days off for the squad," Puel told www.southamptonfc.com

"This is the first time in a long time.

"I think we have played 25 official games - and also more for the international players - already this season.

"The statistic is that we are in the 10 first teams with international players and the number of minutes played.

"This is very strong, and for a team like Southampton this is the first season for many of the players playing every three days.

"Of course, we had a big disappointment in the Europa League, but it is important for the future.

"We develop many players to play for any position in any places, and this is important for the team.

"Three days after this game will be important for the players, not just for the physical level, but all to stay with their families."

Saints' immediate task is a Vitality Stadium appointment with Eddie Howe's Cherries, who sit level on points with Southampton and lie just one place behind them.

Puel is no stranger to derby occasions following his time as a player and manager in France, and he is relishing the rivals' latest meeting.

"I know the rivalry between two clubs

I saw this, of course, with many games in France," he added.

"For our supporters, our fans, of course it's important to get a good result against Bournemouth

I know this, but for us and the players it's important to keep a good concentration about our team.

"I think we will see a good game because the two teams try to play on the ground with a good philosophy.

Targett has undergone surgery on a hamstring problem and is expected to be sidelined for four months, while Austin faces shoulder surgery.

Puel has reported no fresh injury concerns, with Cedric Soares expected to feature after recovering from illness and goalkeeper Alex McCarthy being back in training.

But Oriel Romeu is sidelined due to a one-match ban after recently collecting his fifth booking of the season.

"For every position is a good player, and this is very important in the philosophy of this club

Southampton also try to have that.

"We will play a good team, with good players and a good philosophy

I think it's interesting.

"I think on Sunday we can do a good game against a good opponent, who will try to play

This is interesting for the fans and for the football."