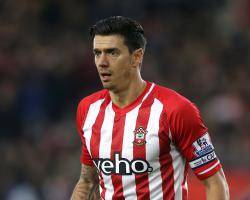 Fonte joined Saints from Crystal Palace in January 2010 and has been a key figure in the team's rise from League One to the Barclays Premier League.

The 31-year-old's new contract extends his stay at St Mary's by one year, with his previous deal due to expire in 2017.

"I want to thank the manager, Les Reed, Ralph [Krueger], Katharina [Liebherr] - all of the staff and all of the board - for showing their trust and belief in me.

"I am extremely happy that they are giving me this opportunity to keep being in this great club, and I hope I can give back with good performances and by helping the club move forward.

Fonte was appointed team captain by manager Ronald Koeman at the start of last season and led Southampton to a seventh-place finish, the club's highest in the history of the Premier League.

Koeman said: "I'm very pleased because he's an important player for the team - he's our captain.

"He has played already several years for the club and he is really feeling well in Southampton - he's a great professional and an example of how you have to behave in football.

"He knows what you have to do to develop yourself, and I'm very happy that he stays for more years."

Fonte is set for his 240th Southampton appearance against Leicester on Saturday and the defender's progress has also earned him seven caps for Portugal.

"As skipper, Jose has demonstrated leadership qualities that all young players should aspire to and it is good for them to see such long-term dedication to the club."