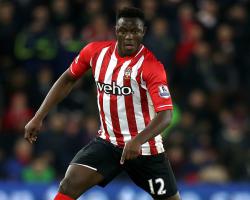 The 24-year-old midfielder has been heavily linked with a late move to Tottenham to link up again with former Saints boss Mauricio Pochettino.

Current manager Ronald Koeman again reiterated neither Wanyama nor reported Manchester United target Sadio Mane will be sold before the transfer window closes on Tuesday - with the Senegalese also a doubt for Thursday night's play-off tie against FC Midtjylland.

But Koeman insisted Wanyama was left behind on doctors advice and it is understood he also visited a local hospital for a second opinion - although he could well be back in the team for Sunday's Premier League fixture with Norwich.

"Victor Wanyama wasn't travelling with the team because from yesterday on he was ill," Koeman said.

I hope he will be available for the weekend but we have to wait."

Mane became a target for Manchester United after they claimed to have ended their interest in Pedro, who instead left Barcelona for Chelsea, but Saints have said he will remain at the club and he could play some part against Midtjylland despite being forced off in Sunday's goalless draw at Watford with a hip injury.

'We have to wait, yesterday he didn't train," Koeman replied when asked if Mane would be fit.

Then we will see if he is available for tomorrow

We have a good hope, but we have to wait."

Koeman was irked by perceived time-wasting by the Danish Super Liga champions in last week's first leg, which ended 1-1 after Jay Rodriguez levelled the tie from the penalty spot.

And he revealed he will set out his side to attack from the off at the MCH Arena on Thursday, knowing Southampton need to score to retain any hope of reaching the group stages.

"We know how they play," he added.

That means we have to win the game or to draw the game by more than 1-1."