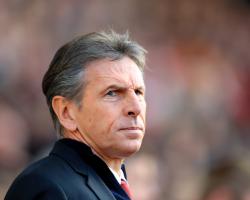 Puel has said Austin is likely need to surgery on his injury and could be sidelined for "between three and four months".

The striker's extended absence will be a major blow for Southampton given he has scored nine goals already this season and six of their 14 in the Premier League.

Jay Rodriguez started up front in the 1-0 win over Middlesbrough on Sunday while Shane Long came off the bench in the second half.

"It is important all the players take (responsibility) without Charlie

All the players can take his place," Puel said.

It is important now to look forward with other players."

One source of attacking inspiration could be Sofiane Boufal, whose stunning strike from 25 yards was enough to seal all three points against Boro.

Southampton signed Boufal in a club-record deal worth ÃÂ£21million in the summer but he has taken time to settle after arriving injured from Lille.

The 23-year-old is an unpredictable talent and he showed all sides of his game at St Mary's, with a frustrating first half coming before a match-winning contribution in the second.

"Sofiane is a talent but also it is important to work with a good attitude," Puel said.

"For example in the first half we saw a lot of dribbles without a good thing, he lost a lot of balls

It was not a good Sofiane.

"It was important he came back in the second half and found a good solution when he plays one or two touch and keeps his spontaneity.

"He is a good player with talent

It's important he makes progress and after that he can be the difference every time because he has fantastic quality."

The victory also added some relief to an otherwise miserable week for Saints, who lost 3-0 at Crystal Palace last weekend and then crashed out of the Europa League on Thursday.

They climb to 10th in the table while Middlesbrough remain 16th.

"It is always difficult to play after an elimination and a big disappointment for all the players," Puel said.

They deserved it for showing this character."