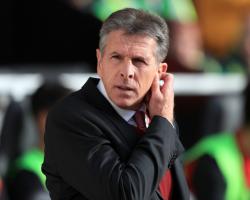 They face the Italians in the Europa League at a time when the pressure they were under after a poor start to the season has been worsened by a row between captain Mauro Icardi and the club's fans.

Inter are 11th in Serie A after three defeats from their opening eight games and despite having heavily invested in their squad during the summer.

Angered by comments made by Icardi in his recent autobiography, the club's Ultras produced banners that claimed he was a mercenary and even cheered when he missed a penalty in their recent 2-1 defeat by Cagliari.

Rumours also persist that manager Frank de Boer - who was only appointed during the summer and has overseen two defeats from two in the Europa League - is at risk of the sack, and Puel said: "It's important to stay calm.

"Perhaps it's a big occasion for Inter to react as they need points but for us it's the same thing.

This is most important.

"It's important to stay with good concentration for every game of this Europa League.

"Of course, to play away at Inter Milan is exciting, but this is for us just a game.

"It's important to try to take the three points."

Puel is expected to again rotate his team despite their convincing performance in Sunday's 3-1 victory over Burnley.

The in-form Nathan Redmond has not travelled to Milan, while full-backs Cedric Soares, Jeremy Pied, Ryan Bertrand and Matt Targett are also all injured

In their absence, Sam McQueen is expected to make his first start for the club at San Siro having only made his first Premier League appearance as a substitute on Sunday.

Puel described Thursday's fixture as "important" for the 21-year-old, but for all of his confidence also revealed he remains uncertain over what is his strongest team.

"I don't know my best team because all the time we can change five or six or nine players," the Frenchman said.

"It's important to keep all the squad with a good concentration

If we want to stay with good results and a good physical level for all the games it's important to respect all my players.

"All the games are important but for me my job is to have every time a good balance on the team with good players and good feeling between them, a good acquaintance