Southampton Are Finally Being Rewarded for Sticking With Ralph HasenhÃ¼ttl

Southampton may be licking their wounds as they saw their 2-0 lead against Wolves evaporate in the time it takes to watch an episode of The Simpsons, but Ralph Hasenhüttl and his side haven't had much need to say 'D'oh!' in recent weeks.

In fact, the man who was known as the 'Alpine Jürgen Klopp' upon his arrival to these shores (a nickname which he has little time for) has been leading a quiet revolution on the south coast since his arrival. 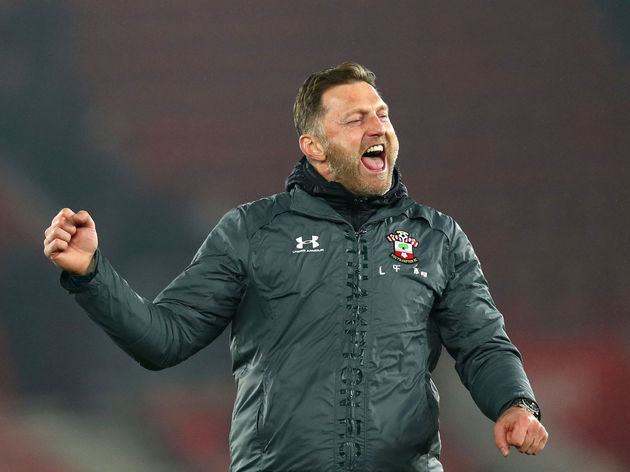 It's been more than a year since Hasenhüttl replaced Mark Hughes in the Saints' dugout with the club mired in a relegation battle, 18th in the table when he arrived.

first five months with the club exclusively revolved around avoiding the drop, with the Austrian trying out a raft of formations, with a three-man defence, flat back four and packed back-five all getting air time as he cobbled together the group of players he had inherited in the search for points rather than performances.

With a full pre-season under his belt and a sprinkling of new arrivals, the Austrian's philosophy is finally starting to permeate through the club and be realised on the pitch.

This 'philosophy', a term Hasenhüttl himself uses to describe his playing style, is most obviously embodied by the high pressing he demands of his players and his formation of choice, 4-2-2-2 (also known by the infinitely more satisfying 4-triple-2).

The imposing Saints boss used this set-up in 66 of his 83 games in charge of Germany's newest title challengers RB Leipzig over the course of his two seasons with the club. And this campaign has given the St Mary's faithful the opportunity to see their side thrive in this line up. The formation may be key, but it is not only the vehicle Hasenhüttl uses to best deploy his side to execute his core ideals, namely, pressing the opposition.

As Hasenhüttl outlined his approach to Martin Keown in an interview with the ​Daily Mail, he said: "

"We have four parts of our game: working against the ball; in possession; losing the ball; winning the ball. If you are good in all four parts, you have a good chance of winning."

This strategy is also borne out in the numbers. So far this season, only ​Manchester City and Leicester have allowed fewer opposition passes before they attempt a defensive action than Southampton. With the Saints pressing at almost the same rate as ​Liverpool. But the paymasters of the club held their nerve, and the form ​Southampton have shown since will serve as vital evidence in the argument made by any future manager in a poor run for keeping the faith.

Much has been made of the fact that, over the last ten games, Southampton have six wins and 19 points to their name, a record bettered only by the league's top two.

This may be the result of fatigue creeping in, as the players' fitness is yet to catch up with their willingness to press, but it's hard to say without further evidence.

One area which it's clear Hasenhüttl's men do thrive in has been set pieces. This season, only three sides in the division can better the Saints' nine goals from dead balls, w This is not a new route to goal