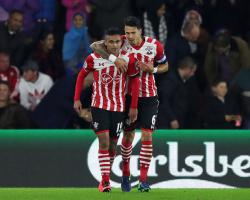 The club's record signing, whose introduction to English football has been delayed by injury, curled in sensational effort to sink Sunderland 1-0.

It was just a shame that so few were there to see it, with Saints' ground half empty and an entire stand shut for the fourth-round tie.

The stay-aways looked to have made the right decision, however, as an hour desperately short on quality ticked painfully by.

But in the 66th minute Boufal, the ÃÂ£21million summer signing from Lille, scored a fabulous winner to pile on the misery for Sunderland.

To add to their problems the Black Cats, whose only two wins all season have come in this competition, had manager David Moyes sent to the stands after they were denied a late penalty

Boufal was one of nine changes to the Southampton line-up, with boss Claude Puel mindful of their Premier League and Europa League campaigns

Moyes made just four changes, including a first start for striker Victor Anichebe whose most notable contribution otherwise this term was his Twitter gaffe earlier in the week

Sunderland managed the first shot on target midway through the first half with their first meaningful attack, Wahbi Khazri forcing a near-post save from Alex McCarthy with an angled drive

Luckless Saints striker Jay Rodriguez, who has been dogged by injuries for two years, was forced off after 25 minutes having failed to shake off the effects of a nasty clash of heads with Sunderland full-back Billy Jones

Rather than turn to in-form striker Charlie Austin, Puel threw on Olufela Olomola for a debut, but probably regretted it when the teenager blazed a good chance over before the break

The 23-year-old controlled an up-and-under from James Ward-Prowse superbly, stepped around Jones, looked up and curled an unstoppable shot over the diving Jordan Pickford and inside the far post.

Moyes predictably sent on Jermain Defoe in a bid to salvage the tie and the four-goal striker scampered through on goal with 10 minutes left but fired his shot too close to McCarthy.

Moyes' frustration boiled over in stoppage time when no penalty was given after Anichebe went down under Maya Yoshida's challenge, and watched the dying moments from the stands as the Black Cats crashed out.