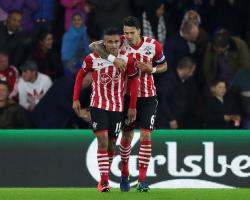 The Moroccan winger, Saints' record ÃÂ£21million summer signing, was out injured for the first two months of the season.

But he marked his belated full debut with a fabulous goal as Claude Puel's side beat Sunderland 1-0 to reach the quarter-finals of the EFL Cup.

In the 66th minute of what had until then been a dull encounter, Boufal brought an up-and-under down with one sublime touch

"It was a beautiful goal and I'm so happy to score my first goal at St Mary's," Boufal told the club website.

"I want to say thank you for the support of all the fans who came.

It was a great night for me.

"The spirit is very strong

My team-mates are so happy for me because they see me come into the club when I couldn't play.

"Now they see me score this goal and they're happy for me so I'd like to say thank you to them and to all the medical staff.

"The goal isn't just for me it's for everyone."

Sunderland felt hard done by after being denied a late penalty after Maya Yoshida tripped Victor Anichebe in the area, an incident which saw manager David Moyes sent to the stands.

Midfielder Duncan Watmore told the club's website: "It's another loss which is frustrating for us but we have to keep going.

"We could have had a penalty but losing is frustrating and it's disappointing to be out of the cup.

"You could say we haven't had much luck but sometimes you've got to earn it, so we will keep working hard for each other and be positive."