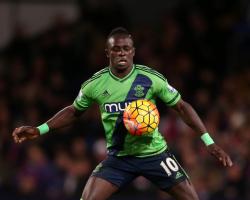 Manager Koeman has again insisted that both Mane and Wanyama will remain at Southampton beyond the January transfer window, despite strong interest from Barclays Premier League rivals.

Koeman dropped Mane for Saturday's 1-0 league defeat at Norwich after the Senegal forward was late for a team meeting, sparking fresh speculation he was headed for a January transfer.

Saints' Dutch boss continues to reject all suggestions either Mane or Wanyama are itching for a move - and vowed to banish anyone misbehaving in order to force a transfer.

"If there is any player thinking if his behaviour is not good that makes it more easier for the player, then I'll put the player in the stands until the end of their contract," said Koeman.

"Because in my opinion that's not the way you have to do your job as a football player."

Kenya holding midfielder Wanyama has 18 months left to run on his deal, with Koeman insisting Saints are continuing efforts to discuss a new long-term contract.

Mane signed a four-year deal when he joined Southampton in 2014, but has been the subject of consistent speculation around keen interest from Manchester United.

Southampton could look to cash in on Wanyama in the summer if he opts not to pen a new St Mary's deal, mirroring the process with Morgan Schneiderlin, who joined Manchester United last summer.

However, Koeman insisted both Mane and Wanyama are fully focused and enjoying their football on the south coast.

"I'm not doubting about that," said Koeman of Mane and Wanyama's commitment.

"That's the daily basis in communication with the players, and it's too easy to mention after the mistake of Sadio or the second yellow that the players are showing that they like to move.

The player knows the position in the club, and what we think about the players

"That's no reason to doubt about that

I don't have doubts about that

They are important players and they like to be here

They are still happy

England goalkeeper Fraser Forster is closing on a return after nine months out recovering from knee surgery - but Koeman said Saturday's FA Cup third-round clash with Crystal Palace will come too soon.

"First of all we're very pleased Fraser played his first game in nine months, on a good level," said Koeman, after Forster featured for Saints' under-21s.

"This weekend is too soon in our opinion, and he will play again with the under-21s on Monday.

"Then after that we will have discussions about what we have to do about our goalkeepers and finally the best will start.

"But that will start after Monday."