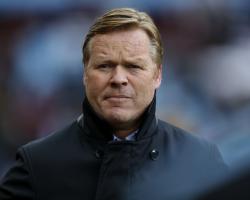 Saints have struggled to keep hold of their big names in recent years, with the likes of Adam Lallana, Dejan Lovren, Nathaniel Clyne (all Liverpool) and Morgan Schneiderlin (Manchester United) leaving over the past two summers.

It may also be good enough to secure Europa League football next term, and Koeman is hoping his star players will stick around.

He said: "I don't know (if we will be stronger)

It depends whether we can keep everyone for next season.

"(If they stay) then yes, I still believe in developing the team and the individual players, and the players learn from his first Premier League season like Virgil (van Dijk) and (Jordy) Clasie, because that makes the team even stronger.

"Maybe we can sign a very good player and every season we like to have a better team.

"We will not have many changes, but we know the situation

We know we are Southampton, (we would) like to keep everybody in

But still, for a Southampton player, if a big team in the Champions League comes, it is always interesting for the player.

"That is normal and I can understand that.

"I can mention to the club that nobody can leave, but also I don't make the last call in this club - that is the board

Finally it is the board's decision on the players

"The number of players coming in depends on other circumstances."

Goalkeeper Fraser Forster and midfielder James Ward-Prowse signed new contracts this week, tying them to the south-coast club until 2021 and 2022 respectively.

That came a week after Dutch defender Van Dijk agreed a new deal, and the Saints boss was delighted to see the trio commit.

"First of all with the contract of Virgil van Dijk, which happened last week, and now Fraser Forster and Prowsey

Great news and great work from the club.

"We like to keep the players in and keep developing as a club and a team and then you need the good boys to stay and that is what we like and very good for the club."

Koeman has been linked with the vacant Everton managerial role and, while he denied any interest in succeeding Roberto Martinez on Friday, the Dutchman acknowledged things can change quickly.

"I am happy here but I know about football," he said

"Today it is sunny, tomorrow it is raining

Everybody knows what football is

I think the team is more consistent than last year."