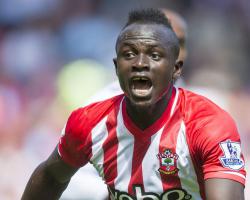 Mane was dropped from the starting line-up two hours before kick-off, having arrived late for a team meeting.

"I feel let down by some players, yes of course - because we had a different line-up for the game," said Koeman.

He came late and that's impossible.

"Everybody knows that we have a sanction - you don't start

So then you have to make changes in the team, changes to all the set-pieces, everything.

"I don't understand it

You will have to ask him why

I didn't ask - otherwise then you get into details and it is already too late."

Koeman acknowledged it was the second time Mane had received the sanction.

"My message to Sadio two days ago in training was that I didn't think he was really focused and concentrated," Koeman added.

"Yes I feel let down by him, but it's felt much more by his team-mates because we are a club where we like to treat everybody very respectfully and you have responsibilities as a player, to the fans, to your team-mates, to your board, to the technical staff.

"We had a great talk from our chairman on Friday about the club, the team, about the respect, the ambition, the spirit, focus, concentration

And then this happens.

"Also I'm angry about the second yellow card from Victor because a player with his experience needs to know if you already have a yellow in a game, that you cannot do that tackle in that position on the pitch."

Southampton had the lion's share of control and chances at Carrow Road until being reduced to 10 men, but now find themselves just a point ahead of their newly-promoted hosts.

"I agree that we were the dominant team, that we had the best chance in the game when Shane Long was put through, and we played some good football," said Koeman.

"But it's so unnecessary what happened because with 11 against 11, still we are stronger than we showed here and we know we are in a difficult situation.

That's my worst disappointment of the day."

The story could not be more different for Norwich, with a Tettey winning goal earning all three points like it did at Old Trafford before Christmas.

Many of the plaudits headed the way of Belgian international forward Vadis Odjidja-Ofoe, whose introduction on the hour helped conjure up the game's only goal.

"We had three real good chances in the first half, and unfortunately we couldn't take any of them," said Norwich manager Alex Neil.

"There was a lull in the game at about the hour mark and we needed to force the issue - which is when Vadis came on and I thought he really injected some quality and creativity going forward, and he created the goal for us.

"I'm over the moon with the boys in particular, because when you are going through difficult spells, there have been questions posed about them and me - and the best way to deal with it is to win games.

"We've won some crucial games now and kept two clean sheets as well, so there are a lot of positives to take."