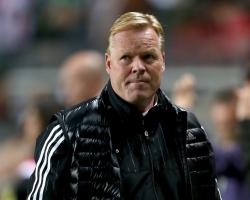 The charismatic German will be desperate for victory after draws against Tottenham and Rubin Kazan but Southampton are in good form, having lost just once in their last seven matches.

Koeman's first season in England ended with the south-coast outfit seventh in the table - the club's highest ever finish in the Premier League - but the Dutchman admits the rigour of English football took some getting used to.

"What might surprise Klopp? Every weekend it's very intense," Koeman said.

"You don't have a lot of difference between the clubs

You have to be play at a good level to win every game.

"You can lose against everybody

You can win against everybody.

"If you stay one year as manager you realise it's a tough competition.

"There's no Christmas break and you need a full squad for that."

Liverpool are a team in transition under their new manager as they begin to adjust to Klopp's dynamic, high-pressing style of play.

The Reds were impressive in the opening half an hour at White Hart Lane but appeared to run out of steam, while old problems in attack resurfaced on Thursday as they failed to break down 10-man Kazan.

"On the one side it's difficult (to prepare for Liverpool) because maybe they have some players like Christian Benteke and Daniel Sturridge back from injuries," Koeman said.

"I think (high-pressing) it's how they like to play football

It was the same in the first game and (against Kazan)

I don't think they will change.

"But the most important thing is ourselves

It's all about that.

"You have to be focused on your job and the players have to play at the level they expect.

"Liverpool are a big team with a big history

They will always get more attention than Southampton

Koeman may be without Jay Rodriguez for the clash.

Rodriguez has been eased back into first team action since returning from 16 months out with a cruciate ligament injury, but the forward is struggling with pain in his feet.

Shane Long is out with an ankle problem while Florin Gardos and Fraser Forster are also sidelined with knee injuries.