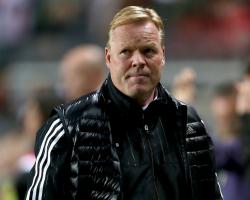 Europe has provided no respite either, with Jose Mourinho's side suffering a 2-1 defeat at his former club Porto in the Champions League on Tuesday.

But Saints boss Koeman said: " Normally they will fight to win titles because it's not like that one year they have really the best team and the next year is not like that

"Everybody can have a difficult start to the season

If you watch the goals that they let in against them, that's a big difference from last year in that aspect

"Maybe they lost a little bit but they are still very strong.

"We know maybe the start of the season is not what everybody expected of Chelsea.

"They were the strongest team last year but, okay, it doesn't say anything about the situation because they have the qualities, they have the players to give a good reaction.

"Finally they will go up in the table."

Chelsea were marching towards the title when Southampton visited last season and were held to a 1-1 draw thanks to Dusan Tadic's penalty.

And Koeman is confident his side can pick up another positive result in west London.

"That feeling we had already last year," the Dutchman added at his pre-match press conference.

"We know what we can expect, we can have a good result if we play on our level because two times we had a draw against them last year.

"That belief that we had last year, we have to show again."

Koeman could add Jordy Clasie to the squad at Stamford Bridge

The Holland midfielder has yet to feature in the Premier League for Saints due to an ankle injury, but he has trained this week and is in contention.

Koeman will otherwise choose from the same squad which beat Swansea 3-1 at St Mary's last weekend.