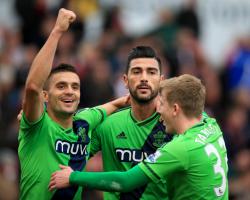 The Italian arrived in Staffordshire having not scored since November 1 but he followed up a header from a Steven Davis corner by beating Jack Butland again on the half-hour mark in a performance which was reminiscent of his early-season form.

Dusan Tadic's dithering in front of goal, Marko Arnautovic's reply for Stoke and substitute Sadio Mane's harsh red card late on did not take the spotlight away from Pelle, who moved into double figures for Saints this term in a 2-1 victory that moved them up to seventh.

Having scored nine times in the opening 16 fixtures while Saints were also hovering around the European spots, Koeman now wants Pelle to hit a similar run of form in the final eight games.

"If we like to keep fighting for European football then we need the front players in a good shape and scoring goals," Koeman said

"That's a big impact for the team

It was a great response from Graziano today, he was strong and scored two goals

He knows he's a big personality and he had a great game today.

If you get the goal then you become a little bit more in a comfortable situation as a player and it's all about scoring goals for strikers."

Koeman was less pleased with referee Lee Mason, who denied Tadic a penalty when he was upended by Butland 16 minutes from time before brandishing a stoppage-time red card at Mane following a clash of heads with Erik Pieters.

It was the sixth time this season Southampton have had a man sent off in the league, yet Koeman confirmed Saints plan to appeal the second dismissal of the campaign for Mane.

"Sadio is trying to put his head to the ball; Pieters is doing the same

Even Pieters told me afterwards there was nothing

We will appeal against that red card."

Stoke's sluggish opening half an hour, during which time Xherdan Shaqiri also picked up a thigh injury, resulted in a first defeat in five games and it came as something of a surprise given captain Ryan Shawcross was back at the heart of the defence.

"That was the story of our day really, the start that we had," said Potters boss Mark Hughes.

"It takes the game away from us

"We conceded from the very first set play, that was a disappointment given we'd highlighted that before the game.

"Second goal that they had is obviously poor from our point of view, we weren't correct in our defensive work

Jack will be a little bit disappointed he hasn't got a hand on it but even before that we shouldn't have allowed the lad Pelle to walk into our penalty area and get the shot off."