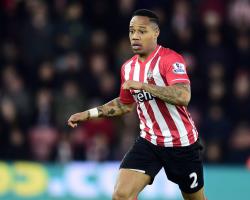 Saints are eager to strike an agreement with Clyne, whose current contract expires at the end of next season and is reportedly a summer transfer target for Manchester United.

Manager Ronald Koeman last month gave the 24-year-old 10 days to make a decision on his future and while that deadline has now passed, Reed says a new agent has seen talks progress.

"That deadline was more about getting a response and that issue has been solved by the fact Nathaniel has changed his agent.

"We got an immediate response from his new agent.

"That's not our business but there was something there slowing things down.

"That's all accelerated, I'm in discussions with his agent and those have been very, very positive."

Clyne has been one of Southampton's star performers this season, helping the club achieve the second best defensive record in the league behind Chelsea.

Doubts emerged about the right-back's future at St Mary's, however, after he recently expressed his desire to win trophies and play in the Champions League.

Southampton are currently seventh in the table, 11 points adrift of the top four.

"There's bound to be a lot of speculation because he's such a good player and has had such a good season so we have to balance that against what he can do for us in the future and what we can do for him," Reed added.

"We're at a very good place at the moment in terms of the discussions going on and I'm confident again that we will have a resolution to that sooner rather than later."

An agreement with Clyne would represent a huge boost to Koeman's plans for next season, particularly after Jay Rodriguez committed another four years to the club this week.

Rodriguez has not played since rupturing his anterior cruciate knee ligament in April 2014 but the 25-year-old has still been linked with a number of clubs, including Tottenham.

"What you don't want with a player like Jay is for the speculation to continue - the summer transfer window would become a frenzy," Reed said.

"We're absolutely delighted, there's been a real buzz about the place, it's been a great message.

"I'm sure everybody is happy to see a player of Jay's stature commit because he believes there's something here in the future."