Southampton manager Ralph Hasenhüttl was delighted with his side's performance

The Saints had taken the lead in extraordinary circumstances, as Shane Long capitalised on a blunder from Hornets defender Craig Cathcart to put the away side in front after a record breaking seven seconds.

Straight to the top ⚡️

Though the ​Saints conceded a late goal to Andre Gray to be denied all three points, the draw moved them six clear of Cardiff and the relegation zone with three games remaining, and Hasenhüttl was full of praise for his players efforts after the game.

"I think we missed in the first half to go higher in the lead because we had a lot of chances and we were a little bit unlucky with two times hitting the post," Hasenhüttl said, as quoted by the Daily Echo.

"Second half it was clear that they try everything to get an equaliser and the pressure was massive in the last ten minutes and also the overtime.

"We had a few good counter attacks in the second half also but didn't score and at the end it was a pity they got the equaliser, but for us it was more positive than negative because to take a point here is not so easy. 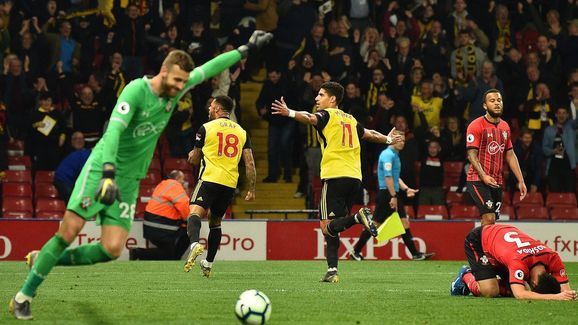 "This is a very important point because now we are six points ahead of Cardiff and three points ahead of Brighton and we have a home game against Bournemouth where we want to make the last step.

"It will be fantastic if we are safe two games from the end. When I was coming in if you told me we had a chance to make it clear against Bournemouth, I would take it for sure."

Southampton's home game with Bournemouth on Saturday will then be followed by clashes with West Ham and Huddersfield, with Hasenhüttl no doubt confident that his side can avoid the drop after this performance.