​Southampton manager Ralph Hasenhuttl was delighted by his side's much-improved second-half display as they ​recorded a 2-1 win over Tottenham.

Harry Kane gave Spurs the lead midway through the first half, before a Yan Valery strike and stunning James Ward-Prowse free kick in the final 15 minutes of the game handed the Saints a shock win.

Speaking after the game, Hasenhuttl admitted ​Southampton were fortunate to be only one goal behind at half time, but revealed he was pleased with the reaction of his side following the interval. 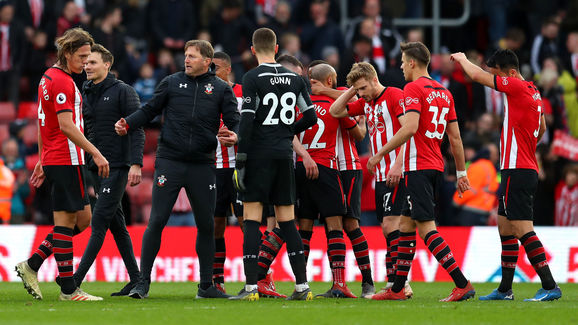 As quoted by ​Sky Sports, he said: "The good thing was we were only one goal down, that gave us the chance to change a few things and to force a little nervousness and put them out of their comfort zone because Tottenham were amazing [in the first half].

"That's what the crowd felt in the second half, that there's a team on the pitch fighting for every point and that was a moment to celebrate with them but also to tell them that it's only one step, a big one maybe."

Despite the win, Southampton remain just two points outside the relegation zone following Cardiff's win over West Ham, with Hasenhuttl highlighting the significance of picking up three points as teams around them do likewise.

He added: "We knew that we need to take a point minimum today, that we take three is amazing. If you see all the opponents at the bottom were winning their games.

"It's a tough race, and for us it's an important step. We have three weeks and no game, and we are above the line, and can work with a good game in our mind."

What. A. Win.#SaintsFC certainly had plenty of luck on their side today but you still have to make the most of it - and they certainly did.

All credit to Ralph Hasenhuttl. His half time changes made all the difference. Football - what a stupid yet amazing game!

One player singled out for praise after the game was match-winner Ward-Prowse, with the Austrian in awe of the 'wonderful' set-piece that decided the game against ​Tottenham.

He said: "The second goal was unbelievable. I think maybe closer than last week [against Manchester United], maybe more difficult, but his technique is gorgeous.

"It's not so nice for the 'keeper to stand there while Prowsey steps up to take a free-kick, but he made a fantastic game, he was everywhere fighting for every ball. To decide this game is fantastic for him."