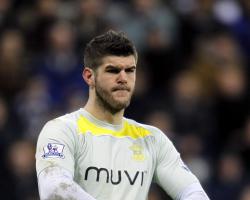 The England goalkeeper has already started light training as he continues his recovery from patellar tendon knee surgery in March.

Southampton boss Ronald Koeman believes the former Newcastle and Celtic custodian could be back in full training "in four or five weeks".

Saints initially thought Forster may be sidelined for an entire year, but the 27-year-old has made impressive progress through arduous rehabilitation.

"He's doing very well, everything is going to plan and it is fast," said Koeman.

"I don't want to say he will be back in four weeks but it's going good.

"He could be part of the group in four or five weeks."

Forster joined Southampton from from Celtic in a ÃÂ£10million deal in August 2014, establishing himself as a mainstay under Koeman before his long-term injury.

Forster's impending return to fitness will prove a boost to country as well as club, with the three-cap keeper's availability bolstering boss Roy Hodgson's resources.

Should Forster return to top form across the second half of the Premier League campaign, then he will fight for a spot in England's Euro 2016 squad.

"He has worked very hard and is already training with Dave Watson, and that's real goalkeeper sessions," said Koeman.

"Everybody is happy with how he is and that he's recovering well.

"We know it takes a long time to recover to 100 per cent but he will come back.

"He's coming back from April which is a long time.

"He needs continued training and his first game will be in the Under-21s.

"That's the same for everybody, goalkeepers, defenders, midfielders; everybody plays in the Under-21s first."