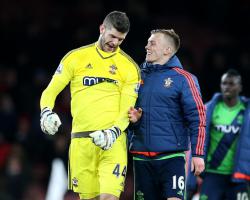 Forster, who is set to be named in Roy Hodgson's Euro 2016 squad on Monday, has penned a five-year contract extension, with Ward-Prowse signing for six more seasons.

The pair follow defender Virgil van Dijk in committing to the club, with the Dutchman having agreed new terms until 2022 in the past week.

Forster, 28, joined Saints from Celtic in 2014 and has gone on to establish himself as one of the top keepers in the Barclays Premier League.

It's been another good year for the club and I think there's real ambition around the place and it's good to be a part of it.

"To commit and sign a new deal is unbelievable and I'm just looking forward to getting started again.

"If you look at just last week with Virgil signing his new deal, that was obviously positive news and after last year and then this year it's obvious things are moving forward and hopefully we can keep doing that in the future."

Ward-Prowse, an academy graduate who is now England Under-21 captain, added: "I'm delighted

When I knew I had the chance to extend my stay here it was a no-brainer for me.

"It's pleasing that the club have shown that they have faith in me to extend my stay and I want to repay the faith to the club for putting their time and effort into making me the player I am today."