Everton yet to agree compensation with Southampton for Ronald Koeman 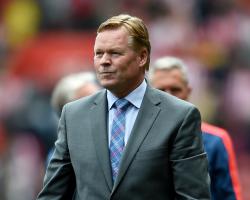 Talks continue with Southampton over a suitable compensation package for Koeman, with no official word from either club despite reports saying a deal had been struck

Once that negotiation has been completed getting Koeman to agree personal terms may be slightly easier, although the chances of actually seeing the Dutchman on Merseyside appear slim as, according to reports in his homeland, Koeman has gone on holiday again

The 53-year-old has helped make the Spanish club a significant profit in the transfer market during his 15-year spell in the job after securing top fees for players with untapped potential, while also contributing to five Europa League victories in the past decade

It is believed Sevilla would require ÃÂ£3.8million to trigger Monchi's release but that is unlikely to deter Everton, backed by Iranian billionaire Moshiri who has reportedly set aside a ÃÂ£100million transfer war chest for the new manager