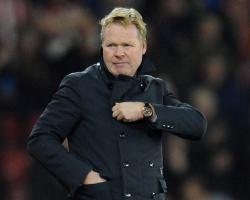 The Canaries go into the new year buoyed by recent wins over Manchester United and Aston Villa, results which lifted them three places and three points above the relegation zone.

"I was watching the game they played last, against Aston Villa at home, and they are strong.

"They have a confidence now that they can beat teams

They won away against Manchester United, and that gives teams like Norwich a big belief and a big confidence to battle to stay in the Premier League

That's one of the reasons why it's a difficult game.

"They are fighting to keep their position in the Premier League

But we need to win."

Southampton pulled off a shock 4-0 win over Arsenal on Boxing Day, but their failings in front of goal resurfaced as they went down 2-1 at West Ham last Monday.

They led through an early Carl Jenkinson own-goal and had numerous chances to add to their advantage before half-time.

But, much to Koeman's frustration, they could not turn their dominance into goals and eventually crashed to second-half strikes from Michail Antonio and Andy Carroll.

"If we are so dominant like in the first 45 minutes you have to score more," he added.

"If you create five or six good chances you have to score at least two goals, and if you don't and you score one the opponent is still in the game

If they play 45 minutes on the level we did then they score more than one goal and win the game."

Koeman will be without midfielder Oriol Romeu through suspension after he was booked for the fifth time this season at Upton Park.

Defender Cedric Soares and striker Graziano Pelle are also set to miss out again through injury.

"I don't expect a lot of changes in the squad that we had last time," said Koeman

"I don't think Pelle and Cedric can play, they're still out for the weekend

It's part of football that you have to deal with injuries."