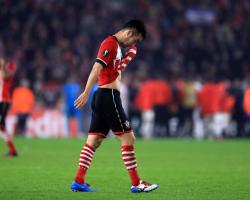 The Saints bungled a gilt-edged chance for their best continental run since 1977 by bombing out of the Europa League thanks to a 1-1 home draw with Hapoel Be'er Sheva.

The Israeli minnows progressed to the last 32 thanks to Maor Buzaglo's angled strike, with Virgil Van Dijk's added-time goal not enough to save the Saints.

Defenders Jose Fonte and Van Dijk have been heavily linked with moves away from Saints, but manager Puel has continued to insist the club must forget all transfer talk.

"It's not the moment, it's not the time to speak about the window in January," said Puel.

It is very important.

"I think we have lost many points with a good thing with the players, playing a good game, and now it's important to keep concentration and to be clinical to win our games.

"This is the most important and it is a good challenge and to see a good reaction.

"It is a strong challenge because this is a disappointment.

"It's a good challenge to see my players' reaction for the next games.

"It is difficult to find good words for this (defeat).

"We played this competition with our all possibilities and it's difficult to accept this result, with just one shot, one chance and one goal for this team."

Puel admitted Austin will miss the weekend's Premier League clash with Middlesbrough, but remained unsure how long the 27-year-old will be sidelined.

"Charlie has a shoulder injury and we will see about this," said Puel.

"I don't know how long he will be out but he's important for us.

"I'm not sure if it's dislocated

I don't know about that but he cannot play for the next game of course.

"We will assess him in the next few days.

"We have Shane Long, Jay Rodriguez, Dusan Tadic and Sofiane Boufal; it's important to work with all the players."

Match-winning forward Buzaglo insisted Hapoel will have no fear, whoever they now face in the last 32.

"We're not scared of any other team, we believe in ourselves and we've proved that we're strong, mentally too," said Buzaglo.

"We play to win, our team is going for it, we're improving and that's important.

"That was one one of the hardest games of my career, against a very good team and a good atmosphere."