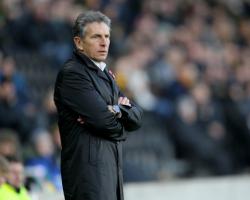 The manager is also confident that it is over the coming weeks that the strengths of his rotation system will be demonstrated.

They have continued to balance the intense demands of the league season with competing in the Europa League, and reaching the EFL Cup semi-finals

As he did for Wednesday's victory over Arsenal from Sunday's over Everton, Puel is again expected to make numerous changes to his starting XI on Saturday at Selhurst Park

He is adamant, however, that the English winter is little different from what he has already experienced in France.

"I have the habits with many seasons to train or to play every three days with all my clubs, except Nice," said the 55-year-old, who has also managed Lyon, Lille and Monaco

"It was all the time opportunities to play every three days and for me it's a good thing.

"I prefer to play every three days (than) to prepare one week (for) the next game.

Overseas managers in particular have often spoken of the potential injury risks involved in expecting players to play throughout such a demanding schedule, and Puel said: "It is very difficult for the team, for the players, without recovery and with strong games

Injured players; it is always difficult.

"We hope we can have players in a good (condition) for this period, and keeping the possibility to change and to rotate the team and to keep the performance.

We will continue (throughout) January in the same (way)."

Tadic has been forced to wear a mask during training, but Puel's consistent rotating means he will have numerous alternative creative midfielders to select in a team where only goalkeeper Fraser Forster, Virgil van Dijk and Oriol Romeu almost always start.

"I hope we can have the (physical) benefits of this rotation; also during this difficult period to (continue achieving) good results and good performances on the pitch," said Puel.