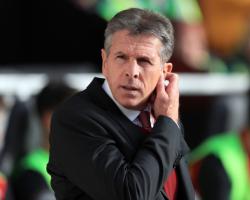 Antonio Candreva's exceptional second-half goal secured an important victory for Inter at the San Siro that prevented their visitors from building a lead at the top of Group K.

One of the most glamorous fixtures in Southampton's history concluded with them third in the group when they could have taken a significant step towards reaching the knockout stages.

Despite being reduced to 10 men after Marcelo Brozovic's red card, Inter have returned to contention after winning their first points.

Defeat also came after Puel made six changes from the starting XI he had selected in Sunday's 3-1 defeat of Burnley - an injury suffered by Matt Targett meant one was forced upon him - which included goalscorers Charlie Austin and Nathan Redmond.

Asked if his changes had disrupted his team, Puel responded: "No

I think if you can play a very good game..

We have all the time fresh players to play good football

This is very, very important.

It's important to consider all the players

We want to go for the qualification with all the squad and not just 11 players.

It's a very, very good game and unlucky

We are just unlucky.

"We do good work and with all the many chances we can play very good on the ground with quality, and just (need) a goal to be rewarded for all this good play

It is a frustration."

Southampton had fine chances to score in the ninth minute, when Jay Rodriguez conceded possession after hesitating from a shooting position, and in the second half through Virgil van Dijk.

The central defender similarly missed a fine chance in the recent 0-0 draw away to Israel's Hapoel Be'er Sheva, and on this occasion produced too casual a finish saved by Samir Handanovic when requiring only a routine finish from directly in front of goal.

Puel also recognised the return against Inter in a fortnight has become "interesting", while Van Dijk told BT Sport: "We were the only team that deserved to win and to concede a goal with their only chance frustrated.

"We should have had the game dead and buried in the first half but that is what happens if you don't take your chances.

We had so many opportunities to win the game."

The result also relieved some of the pressure that had been building on Inter manager Frank de Boer, and the Dutchman said: "They created some very dangerous chances

We knew that they were very dangerous.

"At first there were small chances for both of us

Luckily we have a great goalkeeper, he was unbelievable

The result for the group? It's very important for us."