Claude Puel braced for a test of his squads depth 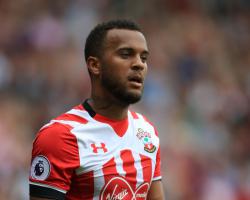 Puel has been rotating his squad, with great success, as he juggles their Premier League, Europa League and EFL Cup commitments.

But injuries have begun forcing his hand, especially in defence with four senior full-backs all sidelined at once.

However, with players like rookie winger Sam McQueen filling in seamlessly at left-back, Saints remain on an impressive run of just one defeat in nine matches.

"I think it was important at the beginning to prepare all the players," Puel said at his pre-match press conference

"We can see it is a good thing now, because we can keep good results.

"But it's a problem to have all these injuries, because it means some players have to play all the time, in every game, like McQueen in the last game.

"I hope we can recover some players for the future, for all the games, but of course to turn and to change the team often is important.

"But we have three very good left-backs now

McQueen was a winger, but he is doing well in this new position."

Nevertheless, 21-year-old McQueen could get a rest against the Blues as former Stamford Bridge full-back Ryan Bertrand is close to fitness following a hamstring injury.

But Jay Rodriguez is a doubt after going off against Sunderland in the EFL Cup after a clash of heads while Cedric Soares, Matt Targett and Shane Long are still out and back-up keeper Alex McCarthy has a hamstring problem.

"Jay Rodriguez has stayed with the physio as he had dizziness so he has had a few days without football," added Puel

"There are other players with injuries like Matt Targett, Shane Long and also Alex McCarthy now.

"McCarthy has an injury to his hamstring and will be out for two or three weeks.

"We will see on Saturday whether Ryan Bertrand can come back into the squad for the weekend."