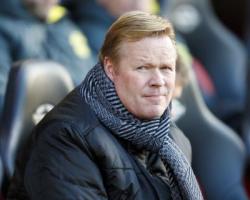 Southampton 2 Tottenham 2Mauricio Pochettino frustrated the fans that once adored him as Tottenham twice came from behind to secure a draw on his first return to Southampton.Last summer the former Argentina international called time on a successful, 16-month stint at St Mary's to take the reins at White Hart Lane.Pochettino's exit was the catalyst to an unparalleled talent drain, although successor Ronald Koeman has not only steered the club to calmer waters but also new heights, breaking the record Premier League points tally set last season with this 2-2 draw.For Southampton, though, this was a case of what could have been after Graziano Pelle twice put them ahead, only for Spurs to level through Erik Lamela and then Nacer Chadli.Southampton's opener came in comical fashion as Pelle capitalised on a mistake by Ryan Mason and weakness by Ben Davies to slot home a goal controversially cancelled out as Lamela bundled home with his arm.Pelle's wonderful header saw Saints deservedly restore their lead in the second half, but yet again Spurs pegged Saints back as Chadli slotted home.The Belgium international's 10th of the season keeps Tottenham ahead in the battle for European football, although the result means Saints moved onto 57 points - their highest top-flight points tally in 30 years.Pochettino can perhaps count himself lucky not to have tasted defeat on his old stomping ground, where the songs flying back and forth were the most entertaining aspect of a tight, turgid opening.It was not until the 25th minute that either goal came under threat, with Morgan Schneiderlin's effort from a James Ward-Prowse corner destined for the bottom corner until the intervention of the ever-impressive Hugo Lloris.That moment lifted the volume inside St Mary's, which ratcheted up several more notches when the hosts broke the deadlock in the 29th minute.Sadio Mane's pace and directness was key, bursting between Jan Vertonghen and Federico Fazio before the latter got in a tackle

The ball fell to Mason but somehow he slipped and chose to play a terrible pass back, which Pelle slotted past a bemused Lloris after all too easily outmuscling Davies.It was an embarrassing goal to concede and one Chadli attempted to cancel out, following a wild strike by slipping past Nathaniel Clyne and producing a cross which Mason met with a powerful shot, denied by a fortuitous block.Steven Davis should have done better when turning wide a wonderful team move shortly before that - a missed chance Saints were made to rue two minutes before half-time.Eric Dier's whipped cross from the right took a slight touch on its way through to Lamela, whose bundled effort was too powerful for Kelvin Davis to claw away - replays showed the otherwise anonymous Argentina international had put the ball in with his arm.Davies had a penalty appeal rejected when play resumed for the second half, before Steven Davis wasted another opportunity from the edge of the box.The Northern Ireland captain was to miss an even better chance soon after, failing to find the target after neat play in the box by Mane and Pelle.Koeman's frustration on the bench was clear after a chance which led Vertonghen to step in as peacemaker after tensions rose between Fazio and Nabil Bentaleb.Lloris did well to tip over a deflected Ryan Bertrand cross when Saints returned to the attack and curled over after Chadli had his own blocked cross at the other end.A goal was soon to arrive, though

Shane Long, fresh from coming off the bench, sent in a fine cross from the right and Pelle rose to power a fine header past Lloris.St Mary's erupted as the Italy striker wheeled off, but the home side did not have the upper hand for long.Dier was again the architect, playing a ball through to Chadli, with the Belgian holding off Maya Yoshida to fire low past Kelvin Davis.Mane claimed several penalties after going down in the box under pressure from Davies and Fazio, with the former's slip leading to a game-ending injury.Saints captain Jose Fonte attempted to find a winner but was denied by Fazio's goal-line clearance, with key man Morgan Schneiderlin forced off through injury as seven minutes of stoppage-time began.Toby Alderweireld and Fonte had diving headers of differing quality, but there was to be no winner as time ran out