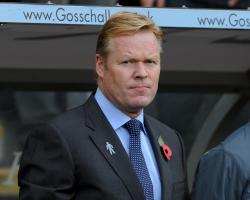 Southampton 2-0 Leicester: Match Report - view commentary, squad, and statistics of the game as it happened.Long brace culls FoxesShane Long brightened up a dank afternoon at St Mary's, netting a brace after coming off the bench against Leicester to continue Southampton's best-ever start to a top-flight season.Eyebrows were raised when Saints forked out B#12million to bring in the Ireland international from Hull during a well-documented summer of upheaval on the south coast.On this wet afternoon, though, Long followed in his club's footsteps by confounding the doubters, scoring twice shortly after coming on as second-half replacement to secure Southampton a 2-0 win - their fifth successive victory in all competitions.In truth, few had expected Ronald Koeman's men to come a cropper against former Saints boss Nigel Pearson, yet it had looked like out-of-form Leicester would be taking a point from this war of attrition.Last-ditch defending during an impressive, stubborn display from the Foxes looked to be enough until eventually buckling 15 minutes from time.Long, introduced just seven minutes earlier, coolly slotted home after a neat Graziano Pelle lay-off, before latching onto a fine Victor Wanyama ball to net another in the 80th minute.The 27-year-old almost completed a hat-trick in stoppage time of a match which ended in a far more entertaining fashion that it began.The first half was a miserable as the conditions, with both sides struggling to create chances of note as the rain fell at St Mary's.Jeffrey Schlupp, one of two Leicester changes, did well to stop a fine Ryan Bertrand cross finding its intended target in a rare opening, while Saints did their best to keep Jamie Vardy quiet.Both sides' defensive resilience, coupled with poor passing, meant the first shot of the afternoon did not arrive until 21 minutes and that Nathaniel Clyne effort was one which Kasper Schmeichel easily dealt with.Wes Morgan powered over a header four minutes later as Leicester threatened for the first time, although it was Saints on top in the driving rain.Sadio Mane blazed over from an acute angle after an initial cross deflected back to him off Marcin Wasilewski, before just failing to latch onto a Dusan Tadic through ball.The match was becoming an increasingly physical fare as half-time approached and, soon after fellow midfielder Morgan Schneiderlin received the afternoon's first booking, Steven Davis was forced off.The Northern Ireland captain looked to have injured his hamstring during a strong tackle by Schlupp, with the Saints midfielder's replacement, Jack Cork, screwing wide shortly after his introduction.It took until the second half for Saints to produce the kind of link-up play that has become a hallmark this season - with Mane playing through Tadic, whose cutback was directed over the bar by Pelle.It would not take long for Schmeichel's goal to be breached, though, as Mane directed home a Bertrand cross from close range

Unfortunately for the home celebrating home fans, offside had rightly been called.Toby Alderweireld entered referee Michael Oliver's notebook for blocking Vardy when play swung to the other end, although Esteban Cambiasso wasted the resulting free-kick.Andy King hit the side-netting soon after but it was Saints on top, with Pelle striking wide and having a close-range header deflected wide before full-backs Clyne and Bertrand had efforts.Jose Fonte, Schneiderlin and substitute Long all had efforts blocked as Saints had a string of corners.However, just as the finish line was coming into sight, Leicester finally succumbed.A lovely clipped ball from Cork was held-up impressively by Pelle, who laid off for Long to curl a first-time, left-footed strike into the bottom corner.Things got better still on an individual and collective level just five minutes later

Wanyama, so impressive for Saints this season, sent a fine chipped pass and Long confidently slotted past Schmeichel.Substitute Chris Wood wasted a glorious chance at the other end and Pelle had a stoppage-time penalty appeal rejected, but the afternoon belonged to Long, who almost completed a hat-trick at the death, but his close range effort went wide