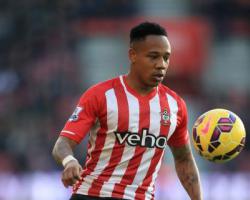 Southampton 1-2 Man Utd: Match Report - view commentary, squad, and statistics of the game as it happened.Double Dutch does for SaintsRobin van Persie's brace handed Manchester United 2-1 victory at Southampton and gave Louis Van Gaal first Premier League blood in his 10-year feud with Ronald Koeman.Van Persie ghosted onto Jose Fonte's loose backpass before flicking home Wayne Rooney's rangy free-kick to seal United's fifth-straight victory.Graziano Pelle had levelled for Saints with his first goal in six games, but in the all-Dutch managers' tale of master meets apprentice, artisan Holland striker Van Persie stole the show.Van Gaal employed Koeman to coach in his Barcelona set-up, but fell out with the former Holland full-back at Ajax in 2004.Koeman's arrival as first-team coach ruffled Van Gaal as he shifted to technical director at the famous Amsterdam club.The rift was set in 2009 when Van Gaal claimed Koeman was "third choice" to replace him at AZ Alkmaar - his parting shot before heading off to Bayern Munich.Both men played down their mutual dislike in the build-up to Monday's clash, but the frostiness was clear; no handshake before or after proceedings, no love lost.Koeman bested his former mentor in the tactical stakes, but Fonte's error and a touch of forward-line class edged Unitedhome.Saints cut United apart at will in the match's middle third, Koeman employing Steven Davis to fine effect in front of the back four.Davis completely overshadowed the ineffective Marouane Fellaini, helping Saints shrug off the injury absences of Morgan Schneiderlin, Toby Alderweireld and Jack Cork.But ominous starts do not come more concerning than gifting a striker of Van Persie's calibre the opening goal.Saints skipper Fonte's woefully under-hit backpass cleared the way for the lurking Dutchman, and the 31-year-old calmly slid the ball home, between Fraser Forster's legs.Just as Saints gave too much respect to champions Manchester City in 3-0 defeat on the south coast two weeks ago, so Koeman's men stood also off United.Slowly but surely however, the hosts realised they boasted by far the greater tactical balance, and finally started to express their true pedigree.Sadio Mane robbed Paddy McNair and shimmied into the box, only to lose control.Pelle flicked round to Tadic on the spin as Saints pressed again, but the chief creator overhit the through-ball.Chris Smalling limped off with a leg problem, replaced by Jonny Evans, with United feeling the pinch.Italy hitman Pelle teed himself up in the area, but was left to bemoan a deflection that handed De Gea a routine save.Saints' pressure toldm though, when target man Pelle delivered after another sustained attack.Fellaini conceded possession all too cheaply to Davis, who raced through the middle and fed Shane Long

The former Hull forward's cross led Tadic to strike on goal, a deflection ushered Pelle through and he fired the equaliser.Long blasted high and wide in a glorious opening after Mane beat Evans to Tadic's cross with an acrobatic leap.Van Gaal then hauled McNair off in favour of Ander Herrera, forced into a tactical reshuffle as early as the 39th minute.The shift did little to ease the muddle in United's midfield, with Fellaini all too often a long-range bystander.Saints burst out of the blocks the brighter for the second half, Long wasting another fine chance when directing a point-blank header straight at De Gea from Tadic's cross.Tadic turned provider again by sliding a perfectly-weighted pass through to Pelle, only for the big Italian to fire over the bar.Ashley Young produced a timely clearance from Mane's low curling cross, and United started to settle.And when Rooney whipped in a dangerous far-post free-kick, Van Persie stole round the back and flicked a left-footed volley past Forster.Saints continued to pick United's system apart, Mane feeding Pelle whose blast forced a solid save from De Gea.But despite the rallies Saints could not force another real opening, and United employed all their nous to sneak to victory