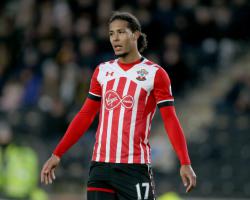 Ronald Koeman suffered defeat on his return to Southampton as the Saints comfortably outplayed Everton to secure a deserved 1-0 Premier League victory.

The occasion was another on which the hosts should have scored more than they did but a first win in four - courtesy of another goal from Charlie Austin, Koeman's last signing on the south coast - proved enough to take them back up to 10th.

Defeat also means Everton have won only one of their past nine fixtures, further highlighting the improvements required and threatening to undermine their fine start to the season.

If Southampton were consistently flat throughout Thursday's 1-0 Europa League defeat at Sparta Prague, they could not have looked more determined upon kick-off at St Mary's.

With a standard of fast, one-touch football of which some of Europe's finest teams would be proud, they created space for Cedric Soares to cross on the right wing.

When Everton then struggled to clear the ball, debutant Josh Sims teed it up for Austin and the recalled striker calmly headed into the back of the net from directly in front of goal.

There was little questioning the results Koeman - briefly the subject of unflattering chants from sections of the home support - inspired in his two years at the club, but rarely would they have played with the style that continued to impress.

Nathan Redmond's 17th-minute cross provided Sims with another inviting header, this time saved by former Southampton goalkeeper Maarten Stekelenburg - and from midfield Pierre-Emile Hojbjerg threatened with a strike that rose just over the bar.

As if demonstrating Southampton's pace and rhythm and Everton's lack thereof, the visitors' first attack of note then concluded when Idrissa Gueye sent Seamus Coleman's 26th-minute cut-back comfortably beyond the bar from in front of goal

Everton manager Koeman appeared to have left in the summer in an attempt to progress his career, but as the game continued to unfold he increasingly looked to have taken a sideways move.

Play at St Mary's perhaps also showed why he was reported to have been interested in signing both Austin and Fraser Forster in the summer.

The striker threatened again in the 58th minute, this time when Stekelenburg did well to save his back-post header

Shortly afterwards Yannick Bolasie attempted a bicycle kick when well-placed in front of goal, only for Forster to frustrate him with an exceptional reaction save

Everton's attacks created the opportunity for Southampton to counter - one was wasted when Sims' pass conceded possession despite options, time and space and another when James Ward-Prowse struggled to connect with Austin's cross - but still a second goal was not forthcoming.

It did not arrive, and further strong defending ensured it did not need to.