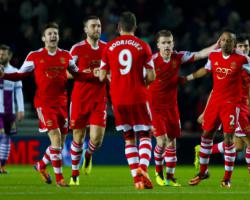 Suarez inspires Reds successLiverpool's title challenge is gaining increasing momentum, with Luis Suarez inspiring Brendan Rodgers' side to a victory at Southampton that moves them second in the Barclays Premier League.A tilt at the crown had never been part of Rodgers' plan this season, but their recent form has given them a real chance of a first championship since 1990.The latest victory came at Southampton - the only side to have won at Anfield this season - with goals from Suarez, Raheem Sterling and Steven Gerrard earning the Reds a 3-0 which sees them climb above Manchester City and Arsenal.It was the ideal start to a run of three successive away matches, with Suarez marking his 100th league appearance for the Reds by ending his an unusual barren run after just 16 minutes.Saints did not wilt, though, with Adam Lallana hitting the post after a Rickie Lambert flick-on, before Luke Shaw, impressing in front of watching England manager Roy Hodgson, went on a marauding run which ended with Jay Rodriguez forcing Simon Mignolet into a fine save.Mauricio Pochettino's side were made to pay for those missed opportunities after the break, as Sterling, one of the nine players on display called up for England duty this week, netted seconds after coming off the bench.Suarez provided the assist for that goal and was involved in Liverpool's third, earning the stoppage-time penalty lashed home by Steven Gerrard.The Uruguay international looked like he would score just six minutes into the match after a wonderful squared ball by Daniel Sturridge, only for a timely interception by Jose Fonte.One-time Southampton target Philippe Coutinho sent a hopeful volley into the side-netting as Liverpool's bright start continued, before Rodriguez bundled an effort wide.The hosts called for a penalty after a Jon Flanagan shoulder-barge on Lallana

Those appeals fell on deaf ears and Liverpool capitalised, opening the scoring after 16 minutes.Having cut out Sturridge's attempt to link up with Suarez, the ball took a fortuitous touch off Fonte into the latter's path, with him continuing to wonderfully steer past Artur Boruc.It was a fine strike and one which appeared to kick-start Saints as Lambert fired over and Glen Johnson cut out a threatening Calum Chambers cross, before Lallana hit the base of the post.Neat team play ended with Chambers crossing from the right to Lambert, whose deft touch under pressure put through Lallana, only for the playmaker's close-range prod to come back off the far post.The Saints captain again had an attempt before Morgan Schneiderlin turned over as Saints continued in the ascendancy.A venomous low Suarez strike was all Liverpool had to show after the goal, which would have been cancelled out before half-time but for the fine reactions of Mignolet.Showing why he was called-up by England this week, Shaw went on a fine run forward and sent in a low cross that, having been stepped over by Lambert, allowed Rodriguez to strike on goal, with the Belgian goalkeeper impressively clawing the ball away.Keen to turn their dominance into a goal, Gaston Ramirez replaced Steven Davis for a second half that saw Schneiderlin have the hosts' first attempt just 70 seconds in.Rodriguez saw a shot blocked by Martin Skrtel and Mignolet held a Lallana effort, but Liverpool's defence was holding firm.The same could not be said for the home side's, with Suarez the architect as the Reds doubled their advantage in the 58th minute.Turning his man when latching onto a ball through, the Uruguay international selflessly cut back for Sterling to slot home seconds after coming off the bench.The strike put Liverpool clear and saw them play with increased confidence for the remainder of the match.Suarez slipped through Sturridge with 69 minutes on the clock, only for him to put wide as he looked to net for a ninth successive match.Jordan Henderson shot wide and Gerrard saw an effort tipped wide by Boruc, who had to be alert to stop Suarez's audacious attempt direct from the resulting corner sneaking home.The 27-year-old had another attempt soon after as Liverpool continued to attack, before earning a stoppage-time penalty.Suarez was caught by a Fonte's flailing leg, with Gerrard stepping up to lash home from the spot to keep the pressure on leaders Chelsea