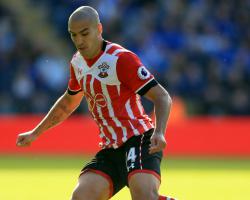 Eden Hazard and Diego Costa shot down Southampton 2-0 to keep Chelsea on the shoulder of the Premier League pace-setters.

Convincing wins for Manchester City, Arsenal and Liverpool 24 hours earlier put the pressure on Antonio Conte's men as they faced a Saints side unbeaten in five matches.

But, inspired by Hazard, they responded with a comfortable victory to stay a point behind the top three and register a fourth straight league win for the first time since April 2015, when they were coasting towards the title.

Ominously for their rivals, they have scored 11 goals in those four games and conceded none, with their three-man defence holding firm once again without captain John Terry.

Early goals in each half did for Southampton, with Hazard setting Chelsea on their way after only six minutes.

Seconds earlier Marcos Alonso had been tormented by Dusan Tadic, the Saints winger turning him inside, out and back inside again before crossing for Oriol Romeu to volley over.

But Alonso recovered his bearings quickly, broke forward and found Hazard, who fed the ball out to Victor Moses on the right.

Hazard charged into the area, received the return ball, turned Steven Davis on the byline and from a tight angle drove a low shot through Fraser Forster's legs.

It was the Belgium winger's fifth league goal of the season, already beating his tally from the whole of the last disappointing campaign.

With Chelsea showing Saints due respect by sitting deep, the hosts went in search of an equaliser and Charlie Austin headed wide while Thibaut Courtois dealt with Tadic's free-kick.

But Chelsea were a menace on the break, and Hazard almost had a second when he ran onto David Luiz's through-ball, jinked along the edge of the area and curled in a shot which Forster got down well to keep out.

Moments later Davis lost possession in midfield and Nemanja Matic played in Costa, but his finish was too close to Forster.

After the interval N'Golo Kante's raking cross-field pass found Alonso, whose low cross was almost turned into his own net by Jose Fonte with Hazard lying in wait.

But Costa all but settled the match in the 55th minute when he collected Hazard's short pass, pushed the ball away from Cuco Martina and curled a stunning effort into the far corner

Saints, to their credit, did not stop probing for a way back into the game, almost found it when Steven Davis' header dropped onto the top of the crossbar before Austin had a goal chalked off for offside.