Wembley in sight for super Blades 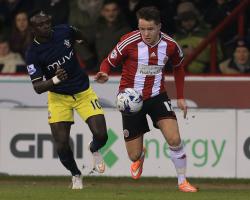 The League One Blades, who reached the last four of the FA Cup last season, saw off West Ham in the second round and were at it again in a one-sided quarter-final as Marc McNulty's 63rd-minute winner gave them a 1-0 victory over Ronald Koeman's men at Bramall Lane.

McNulty pounced from close range and that proved enough, but their winning margin and Southampton's humiliation would have been far greater had goalkeeper Fraser Forster not made a string of fine saves.

The defeat is a fifth in a row and on this evidence the bubble has firmly burst on Southampton's stellar start to the campaign, with the visitors worryingly out-fought by Nigel Clough's men.

They rarely threatened throughout and their misery was compounded at the death when Florin Gardos was dismissed for hauling down McNulty.

The Blades are no strangers to beating top-flight opposition, having seen off the Hammers, Aston Villa and Fulham over the last 12 months, and they immediately settled, more than holding their own against a team ranked 45 places above them in the football pyramid.

They hit the woodwork in just the third minute when defender Jay McEveley's looping effort landed on top of the bar after Forster had spilled a cross, though the visitors did have defenders on the line protecting the goal.

The hosts continued to impress and a rampant spell before half-time saw them nearly break the deadlock on two occasions.

First after a fine passing move Louis Reed drilled a 20-yard effort just over the bar, and shortly afterwards Florent Cuvelier skewed wide from a great position when a loose ball fell to him eight yards out.

Southampton were being constantly harried and pressed by a marauding home side who were out-working them and it forced Koeman into a half-time change as Matt Targett, who had been run ragged by Jamal Campbell-Ryce, was replaced by Lloyd Isgrove.

Campbell-Ryce was also withdrawn at the interval, but that did not stop the Blades creating another opening early in the second half.

Some neat work saw Bob Harris find space on the left and he whipped a cross into the far post where Jamie Murphy was unmarked, but he was off target.

The biggest criticism that could be levelled at Clough's men was perhaps that they had not tested Forster but that changed in the 56th minute as England goalkeeper Forster produced a fine save.

A wicked ball was sent in by Murphy which McEveley flicked on and it was heading into the bottom corner until Forster produced a strong hand to palm it away, with Che Adams' follow-up effort blocked.

United sensed blood and moments after Forster made another fine stop to deny Michael Doyle they took a deserved lead.

A free-kick on the edge of the area was hit low by Harris and Forster could not hold it, with McNulty following up and bundling home from close range.

Southampton had to pick themselves up off the floor quickly or they were in danger of being brushed aside, and they did at least force Blades goalkeeper Mark Howard into his first save of the night when his feet kept out Sadio Mane's low effort.

But it was Forster who remained the busiest Saint on the pitch as he kept his side in it with another save, staying big to deny McNulty, who should have scored.

Southampton did not even threaten to force extra-time.

The Blades, who could have added a second had Forster not made another save to deny Murphy, saw it out without danger, sealing a first semi-final appearance in this competition since 2002/03, with Wembley now in their sights.