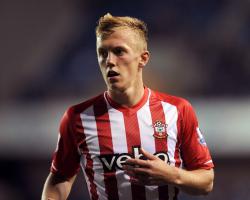 Saints, who play United in the quarter-finals, made a flying start to the season but are now without a win since beating Leicester on November 8.

"We're all desperate to turn around the run at the moment and get back to winning ways," midfielder Ward-Prowse said.

"The Christmas period, there's always another game around the corner to change the fortunes around.

"I don't think there's any better opportunity than the quarter-finals of the cup.

The manager's made it very clear we want to win every game, whether it's a league game, a cup game, whatever it is.

"That's the ethos of the club and that will be taken into the game on Tuesday.

But we know we've got enough quality to win the game."

Ward-Prowse could make his first start after more than two months out with an ankle problem at Bramall Lane.

The 20-year-old came off the substitutes' bench in the first half of the loss at Turf Moor, when 18-year-old midfielder Jake Hesketh sustained a knock to his knee.

Ward-Prowse says morale is good despite the wait for a victory being extended by Burnley.

He added: "We know we're all good players

We know we're a good team

"It's just one of those runs in the season where you get bad results and it's up to you to turn it around."

Ward-Prowse hopes he can play a part in Saints' form returning to what it was earlier in the season.

He insists he is ready to go.

Ward-Prowse added: "It's up to the manager to put me on the pitch then hopefully I can contribute

I'm ready for whenever the manager puts me on.

"It was obviously a very frustrating period for me sat on the sidelines and not being able to do what I love but I'm thankful I'm back and thankful to the medical staff for getting me back in good shape.

"The worst thing for any footballer is to be injured

It's not what you want, but you've got to work as hard as you can to get back and get back into the team."