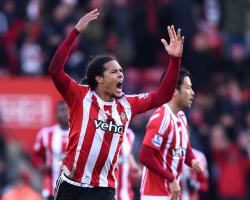 Jermain Defoe thought he had pinched Sunderland a priceless victory with his late goal, only for Van Dijk to hit back at the death.

Southampton had captain Jose Fonte sent off with 10 minutes to play, sparking a frenetic finish, but somehow Ronald Koeman's men escaped with a share of the spoils.

Southampton skipper Fonte was sent off with 10 minutes to play for bundling over Fabio Borini with the Black Cats forward in the clear.

Second-half replacement Defoe seized the extra space to prod home his 14th goal of the season with just six minutes to play.

Defoe's goal looked like it could ease a turbulent week dominated by scrutiny over the club's knowledge of former winger Adam Johnson's crimes.

Instead Van Dijk grabbed Saints a point, and kept Sunderland right in the relegation dogfight.

The visitors ought to have eased all those concerns with victory here, but failed to capitalise and will doubtless leave the south coast frustrated

Fonte giftwrapped the first chance of the match, his stray pass turning into an unwitting through-ball for Borini

The ex-Liverpool forward raced through on goal but failed to fire away a clean strike, letting the hosts off the hook.

Wahbi Khazri's overhit free-kick then drifted over Fraser Forster's head, forcing the Saints keeper to flap the ball onto a post, and then clear

Jack Rodwell then wasted the best chance of the half, side-footing Patrick Van Aanholt's cross well wide on the volley when unmarked on the penalty spot

Oriol Romeu failed to toe-poke home on the stretch at the other for Saints, before further decent work from Bertrand went unrewarded.

The last thing the second-half needed was an early hail storm, but the elements duly added another impediment to two teams struggling for fluency.

Borini flashed a volley just over a stunned Forster's bar, but again neither side could force lasting dominance.

Jordy Clasie fired straight at Mannone when clean through for Saints, before being ruled offside in any case

No amount of desperation could boost Saints' accuracy, with Graziano Pelle wasting a golden opportunity by taking one touch too many, allowing Yedlin to block.

Just when both sides were fretting about a draw, Borini raced clear again and was upended by Fonte.

The Southampton captain was duly sent off for his woeful challenge, but Forster was able to tip away Van Aanholt's curling free-kick.

Substitute Sebastian Larsson curled wide from 14 yards, prompting the Saints fans into song: "That's why you're going down".

Sunderland's counter argument was immediate and clinical, Defoe poking home after being played through by Lamine Kone.

Southampton pressed at the death, Juanmi's shot deflecting wide, and in time added on the hosts equalised.

Van Dijk blasted home to rescue a point the Saints hardly deserved and leave both with plenty to work on.

"Yeeeeeessssssssssssssssss get in there #Safc #believe" - Michael Gray (@mickygray33) thought his former side Sunderland were on their way to three vital points.

Jermain Defoe: The evergreen hitman did what he does best, pounced on his only chance.

MOMENT OF THE MATCH

Virgil Van Dijk blasted home to steal a point for Saints, just when Sunderland thought they were home and hosed thanks to Defoe.

MOAN OF THE MATCH

Fabio Borini worked tirelessly, and he forced Jose Fonte into the lunge that saw the Southampton captain sent off.

But the former Liverpool forward was then caught high-fiving team-mates, for effectively winning a free-kick.

VIEW FROM THE DUGOUT

Southampton boss Ronald Koeman reverted to a flat-back four after his 3-5-2 formation was exposed in Tuesday's 2-0 defeat at Bournemouth.

Not even the switch in tactics and personnel, with five changes, could alter his side's attacking fluency however.

As with Tuesday's loss at Dean Court, whatever Koeman tried here failed to kick-start anything from his men

Saints must rediscover their attacking rhythm to climb the table.

Sunderland for their part wasted a host of chances, only for Defoe to flex his clinical muscles when called into action.

The former Tottenham hitman will doubtless be crucial to Sunderland's bid to avoid the drop.