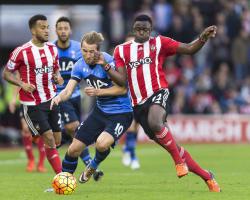 The Saints slipped to a sixth match without a win in Saturday's 2-0 home loss to Tottenham, a painful blow exacerbated when delivered by former boss Mauricio Pochettino.

Wanyama is once again the subject of speculation around a potential switch to Arsenal, but the 24-year-old Kenya midfielder continues to focus on arresting Southampton's recent slump.

"We still need to work together and to know each other more because we had a lot of changes in the team and we still need a bit of time to gel together," Wanyama told Southampton's official club website.

"It's about being together

We just need to fight more and sharpen ourselves up because we have some tough games ahead.

"I think it's not going to go your way all the time, but we believe in ourselves and we believe we can still get there.

"We still have a chance and if we work hard then we can still get up there."

"It was difficult because we didn't have many chances," said Wanyama.

"At the beginning of the game we had more chances, good chances and we just let them score from nothing.

"If a team scores from nothing then it's always going to be difficult.

"We did well in the first 30 minutes then I don't know what happened."