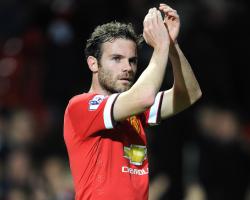 The Dutchman exploited a blunder by Jose Fonte to put United ahead in the 12th minute at St Mary's and scored a 71st-minute winner from a Wayne Rooney free-kick after Graziano Pelle had equalised.

United climbed above Southampton and West Ham United into third place, but they were fortunate to emerge with victory after a lacklustre display that also saw them lose centre-back Chris Smalling to a leg injury.

Nevertheless, Louis van Gaal's side have now won five games in succession, which represents a timely burst of momentum ahead of Sunday's home game with arch enemies Liverpool.

Southampton forced United goalkeeper David de Gea into action on several occasions, but having lost to Manchester City and Arsenal on their previous outings, it was a third straight defeat for Ronald Koeman's men.

Southampton created the first chance, Shane Long heading onto the roof of the net from Ryan Bertrand's hanging cross, but it was United who went ahead thanks to Fonte's lapse in concentration.

The Portuguese defender, who was making his 200th Southampton appearance, played a blind back-pass towards goalkeeper Fraser Forster and Van Persie nipped in to roll home his fifth goal of the season.

Southampton were quick to react, though, and were helped by the fact United lost Smalling -- the latest in a spate of defensive injuries -- which saw Jonny Evans come on for his first appearance since September.

By that stage, Pelle had headed wide from a Steven Davis corner, and Southampton continued to press, with De Gea obliged to field a deflected effort from Pelle.

The equaliser duly arrived in the 31st minute, after a loose pass from Marouane Fellaini enabled Davis to run at the visitors' defence.

Paddy McNair took the sting out of a shot from Tadic, but Pelle ghosted in to sweep the ball into the roof of the net for his first goal since October.

McNair had made a jittery start to the game and after his loose touch gifted the ball to Long, who blazed wide, the 19-year-old was hauled off, with Ander Herrera coming on and Michael Carrick dropping into defence.

Van Persie served a reminder of United's threat with a shot that curled into the side-netting, but Southampton remained on top in the second half.

De Gea was forced to block when Long met Tadic's floated cross with a downward header, while Pelle then screwed a shot over the bar from a Tadic pass after Marcos Rojo became the umpteenth United player to lose possession.

It was United, however, who struck next

Back in the team after a knee injury, Rooney swung a free-kick towards the back post from deep on the left and Van Persie ghosted in to stab an improvised volley past Forster.

De Gea excelled himself again in the 77th minute, plunging to his left to repel a low shot from Pelle, while full-backs Nathaniel Clyne and Bertrand each despatched efforts that narrowly missed the target.