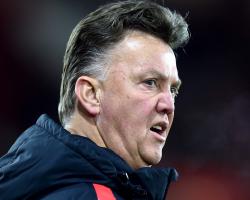 The Old Trafford boss questioned former United defender Neville's credentials in claiming the Red Devils "got away with murder" with a scrappy victory at St Mary's.

Neville condemned United's patchy performance on social media and on Sky Sports, claiming Sunday's Premier League clash with Liverpool could be "like The Dog and Duck versus The Red Lion".

"That's an English expression? Hmm: maybe (United got away with murder).

"It's not so difficult to make an interpretation, when I say he has to pay attention to his words."

The former Barcelona boss hauled off youngster Paddy McNair in the 39th minute and was forced to rearrange his side with Saints pressing continuously.

Van Gaal said "too many" of his players underperformed, but refused to point any fingers.

"I think that not only the goals are telling something about Robin Van Persie, I think also his performance: he was one of only three players on the pitch of Manchester United who were good, or maybe very good," said Van Gaal.

"He had a great influence on the result

Until now that is his best performance.

"Too many players were not good.

"There was a range of course between good and bad, but they were not good.

"Normally you have six, seven, eight who are good and three in that other range.

"But today there were too many players in that range who were not good, I believe."

Van Gaal offered a thinly-veiled barb at his long-term adversary, taking first blood in the Premier League battle against his former friend.

Van Gaal once mentored Koeman into coaching at Barcelona, but the pair's feud has now lasted 10 years.

"Of course if you are the better team you deserve more, but believe me it is always the goals that are counting," said Van Gaal.

"When we played the first six or seven matches, we never won and we were always the better team.

"In that time I didn't say anything about that

You have to learn that also."

Koeman was left to rue another defeat against high-profile opponents, after the 3-0 home loss to Manchester City and 1-0 reverse at Arsenal.

The former Holland full-back refused to address Van Gaal or United directly, but admitted "everything is s*** because we lost".

"We did everything, we created chances, but we made mistakes as well," said Koeman.

"Maybe they made more mistakes than us, but they have players who handle those kinds of mistakes, and that was the difference.

"Because on football and chances, I think we deserved more.

"It's easy in my opinion, we did not lose against Man United tonight, we lost by ourselves.

"Of course it's always difficult, because you're the better team, and again you have to fight against 1-2 down.

"After that moment I think we didn't play well, but that's the difference.

"At this level, detail makes the difference in football.

"The score is 1-2 and you can talk much longer about who played football, which team pressed, but everything is s*** because we lost."