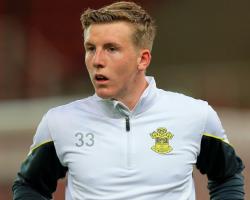 The 19-year-old has impressed since breaking into the first team this season, with his debut coming in August's Capital One Cup defeat of Millwall.

Targett has been rewarded with a new deal until 2019 at a club which has seen Gareth Bale, Wayne Bridge and Luke Shaw flourish after being given a chance at left-back.

"Being a Southampton supporter, it means a lot more to be staying at the club because it's where I want to spend my career," Targett told Southampton's official YouTube channel.

"I want to get into the first team and to keep progressing by playing week-in week-out.

"Ryan Bertrand is doing a great job this season and has made that left-back spot his own, so I just need to keep working hard in training to keep pushing him."