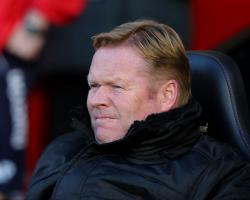 Southampton V West Ham - view commentary, squad, and statistics of the game live.Koeman ponders mounting injury listAn already difficult clash with West Ham has been made all the tougher for Southampton manager Ronald Koeman by a string of absentees.Things look rosy on the south coast right now, with Saturday's last-gasp win at QPR propelling them back to the third in the standings.It means Saints have won six of their last eight league matches - a feat made all the more impressive by the number of key players they have had to cope without over that period.Wednesday's visit of West Ham is no different for manager Koeman, who is without Shane Long, Jay Rodriguez, Ryan Bertrand, Matthew Targett and Lloyd Isgrove through injury.Morgan Schneiderlin will be assessed ahead of the match, while the Saints boss confirmed Emmanuel Mayuka's season is over with groin injury sustained on African Nations Cup duty with Zambia.That lengthy list of absentees means Filip Djuricic, a deadline-day loan acquisition from Benfica, could make his Saints debut despite a lack of match fitness."Finally Filip Djuricic got his work permit yesterday afternoon and did a normal training session this morning," Koeman said."He's part of the squad for tomorrow and it's an exception because it's not, in my opinion, good to have a player with one session in the last week."We miss eight or nine players tomorrow so (I will make) an exception to put Djuricic on the bench but if we need a quality player I can put Djuricic in, not for 90 minutes but for 45 minutes or less."It is a far from ideal scenario ahead of a match few expect to be anywhere near as straightforward as August's 3-1 win at Upton Park.Sam Allardyce's side, much like Saints, have surprised onlookers this term and approach this match eighth in the standings.Only a late Daley Blind strike denied West Ham victory against Manchester United on Sunday, while Koeman is wary of the potential return from injury of Andy Carroll."I am expecting a difficult game because I watched the game last Sunday and I think they played very well, very physical strong, but maybe it depends on the yes or no start from Carroll," he said."The player, if he plays, they can play a little bit more direct, but they showed without that player that they can play good football."It is difficult but they had very good opportunities to kill the game and in the end were a little bit unlucky with one point."That was, I think, the best result for us."Allardyce will field James Tomkins despite the defender breaking his nose against Manchester United, with the West Ham boss claiming his player was also "taken out" in a separate incident with Robin van Persie.The Manchester United striker caught Tomkins with a stray arm in Sunday's 1-1 draw.Despite Van Persie avoiding punishment from referee Mark Clattenburg for catching Tomkins with his elbow, Allardyce called the incident a "naughty" challenge - even though Tomkins himself revealed the break came in a separate incident with Marouane Fellaini.But it will not stop him featuring against Southampton due to West Ham's ongoing defensive injury situation as, with both James Collins and Winston Reid missing with hamstring problems, Allardyce expects Tomkins to once again partner stand-in Cheikhou Kouyate at St Mary's."He broke his nose but it's not serious enough to keep him out," Allardyce said."From a challenge point of view I thought it was pretty naughty

He (Van Persie) had a look to see where the defender was and then took him out basically."The assistant referee gave a foul but he didn't think it was more serious

Tomkins should be fit to play tomorrow night which is the most important thing for us."Neither Collins nor Reid will be fit in time for the trip to the south coast, with Kouyate stepping in well against United, scoring the opening goal and showing he is more than an able deputy.And the news Allardyce may be able to welcome back club-record signing Carroll has been tainted by a potential foot injury to captain Kevin Nolan.With a number of key players still absent, Allardyce is pleased with the momentum garnered from the weekend.He said: "We have to pick up from where we left off against United

They gave everything they possibly had and we want to maintain that level in every game for the rest of the season."So Wednesday night is all about our attitude and determination

We're going to need to push ourselves in order to win

We don't want our season to fade away."