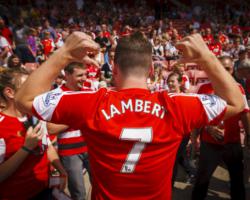 Adam Lallana was irritated by the criticism aimed at him following Southampton's complaint against referee Mark Clattenburg, according to goalkeeper Kelvin Davis.


The club's complaint about Clattenburg's alleged remarks during the Premier League defeat by Everton on December 29 was thrown out by the Football Association and the referees' governing body Professional Game Match Officials Limited (PGMOL). The official was accused of telling Lallana: "You are very different now, since you've played for England - you never used to be like this."


Despite the club rather than the player raising the matter, Lallana has been widely ridiculed, something that initially upset the attacking midfielder.


However, club captain Davis has been impressed by his response, highlighting his decisive strike in last weekend's 4-3 FA Cup defeat of Burnley as a sign of his resilience.


"I think for the first day he was a bit like 'why is everyone coming for me?'," he said.


"But anyone that knows Adam knows that first of all he is a good pro, a good lad, a good person. I think after the first day or two he realised that himself, that he hadn't done anything wrong, he shouldn't be feeling anything negative about himself and then he banged a goal in against Burnley. That kind of epitomises where he is mentally."


Davis captained the side at Goodison Park and hopes everyone can "move on" from the Clattenburg debate, allowing team-mate Lallana's talent to be focused upon.


A place in England's World Cup squad is looking increasingly likely for the Saints academy graduate as his rise from League One to be one of the country's best continues apace.


"As he gets older, he has got that bit of belief that what he was doing in the Championship he can step up and do at a higher level," Davis, in goal when Lallana made his Saints debut against Yeovil in August 2006, said.


"I think as well when he first had the Southampton armband, you could see it kind of held him back a little bit. But now the way he has matured, he doesn't find that a weight now. Again, that comes down to belief.


"The manager coming in at the time he did and working closely with him has helped.


"The way he has been treated from the very top of the club with his new contract has helped the way he has developed, with the England call-up probably that final turning point in his head.


"He has a real opportunity to really become a very good player at this level, so he is obviously great to have around the place."


Lallana will no doubt be key on Saturday if the Saints are to overcome West Brom when they return to league action.


Artur Boruc could be available and challenging Davis' place. The Poland goalkeeper fractured his hand in the defeat at Chelsea on December 1 and may be fit for Saturday - a match Dani Osvaldo (suspension) and Victor Wanyama (shin) will definitely miss.


Gaston Ramirez and Rickie Lambert are recovering well after sustaining knocks in the FA Cup.


Keith Downing is relishing "exciting times" for West Brom as he prepares to hand the reins over to new head coach Pepe Mel after the trip to Southampton.


Assistant head coach Downing has done a stellar job steadying the ship since Steve Clarke's sacking last month and will aim to bow out on a high at St Mary's, before Spanish coach Mel takes over next week after signing an 18-month contract on Thursday.

Albion sit 14th in the Premier League, four points above the relegation zone, after a creditable run of three draws and a win under the likeable Downing.

Mel's appointment is an intriguing one, with the 50-year-old having never worked outside of his native Spain.

However, the former Real Betis boss fits Albion's criteria due to his history as a coach, rather than a traditional British manager, and his reputation for playing attractive football.

"I'm pleased it got settled and there's someone in place on an 18-month contract, which brings the stability that's needed.

"It's been unsettling, particularly in the last week with a lot of rumours flying around. The players try to get on with things and I wasn't sure if I was focusing on the Southampton game or whether the appointment was going to be made earlier."

He added: "I haven't had chance to meet Pepe yet, I'm going to meet him over the weekend. I'm aware he is going to be at the game against Southampton and then we'll crack on next week.

"I've heard good things about the job he did at Real Betis, when he got them up into La Liga and stabilised them. The Spanish press like him. It's a name I wasn't aware of until a few weeks ago but he plays exciting, attacking football."

Much will be made of Mel's reported lack of English but Downing foresees no major problems.

"My Spanish is worse," he said.

"It'll be an interesting time. We're aware he'll need some help in terms of translations but football is a 'universal language' and we look forward to some different ideas."

The caretaker boss admits Mel's appointment is a gamble - but no more so than any other.

"Any appointment is a gamble, you're never sure," he said.

"I always look at the positives. There will be new ideas, his own slant on it and it'll be exciting times."

Downing will be without full-back Billy Jones again for his last game in charge.

Jones has had an operation on a recent injury to his eye while fellow defender Goran Popov (neck) is out. Recent absentees Youssouf Mulumbu and Victor Anichebe are back in training but unlikely to feature.