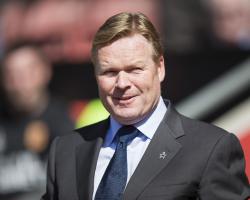 Southampton V Tottenham Hotspur - view commentary, squad, and statistics of the game live.Alderweireld set to featureSouthampton manager Ronald Koeman is confident of being able to call upon Toby Alderweireld against Tottenham this weekend.The Belgium defender left the field on a stretcher at Stoke last week with what the Saints boss said was a "dislocated shoulder", yet he is in line to feature against Spurs on Saturday.Victor Wanyama (suspension) and Filip Djuricic (ankle) remain absent, as do Fraser Forster, Jay Rodriguez and Emmanuel Mayuka

Sam Gallagher will not feature, despite scoring the winner in Monday's Under-21 Premier League Cup final.Steven Davis believes the fact so many Southampton players worked under Mauricio Pochettino could give them the edge.The former Argentina defender last season led Saints to their best ever Premier League points tally during a memorable campaign at St Mary's.Southampton fans' goodwill towards Pochettino was soon eroded, though, as his departure to White Hart Lane proved the catalyst to an unparalleled summer talent drain.Despite that, just a point and a place separate Saints and Spurs as a remarkable season comes to a close, with a positive result for the hosts on Saturday enough to break the points record set last term.Victory would see Koeman's men usurp Spurs in the standings and bolster their European chances, with Davis, one of many to have worked under Pochettino, well aware of what a "big game" this is for all connected to the club."The players never back away from (the fact this is a big game)," the Northern Ireland captain said."It's nice to be in a position where we're having big games at this stage of the season and there's an importance on it."We're looking forward to the game and hopefully we can bounce back and get the three points."It is great to be in a position where we're still challenging for a European spot at this stage."We've had a great season so far but we don't want it to peter out, really."It's about seeing it through and Saturday gives us an opportunity to pick up points against one of our nearest rivals."Pochettino is happy Southampton have continued their progression since his departure and is unconcerned at the prospect of his new club finishing below his former employers."When you take that decision or the club take that decision you need to look and move forward," Pochettino said."This is a different project and one season of transition

I have a four year contract left and we try to build a good team and a strong team to try and fight for the top four next season."I am happy that Southampton is on the top

I love the people in Southampton and always wish the best."Asked if Spurs should expect to finish above Saints, Pochettino called on careful scrutiny of the situation as he moulds his new team."Southampton spent a lot of money and signed very good players," he said."The investment was nearly B#80million

It's a massive difference with us this season."Goalkeeper Hugo Lloris' knee injury will be assessed ahead of the trip