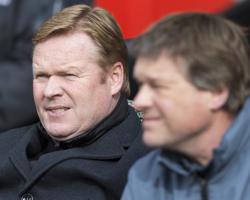 Southampton V Hull - view commentary, squad, and statistics of the game live.Koeman: Saints' rivals defensiveRonald Koeman insists Southampton's goals have dried up due to their Barclays Premier League rivals giving them more respect.Saints have slipped out of the Champions League places and into seventh following a run of three defeats in their last six games ahead of Saturday's home clash with Hull.Koeman blames the slump on a lack of goals but rather than looking to his strikers for fault, he believes a change in approach from opponents has been the telling factor."It's not in my opinion a problem about one player - just look at the last few games," Koeman said."Even when we play away - for example last weekend against Everton - teams don't care about playing football at home, they defend

That is different to the beginning of the season."Now opponents don't care how they play against Southampton, they're happy to defend and they're concerned about getting points

At this point of the season, points are more important for them."We are not always scoring lots of goals and that's the difference

We are not getting the space we had in the beginning."It makes it more difficult because then there is not really a lot of space

Liverpool played with three centre-backs but with five defenders against Southampton, and Hull normally play with five defenders."That means there is not a lot of space, so you have to play very well or you need a player who makes an individual action and scores a goal."But those types of individual, high-quality players are not playing for Southampton."Koeman believes Southampton's Champions League dream is over, but still covets a place in the Europa League."You have to be realistic

The focus at the moment has to be about fifth, sixth and seventh position in the table," he sad."We would like to play European football and fifth and sixth positions mean European football."Hull boss Steve Bruce has admitted his side need to pull off a couple of "crazy results" if they are to preserve their Premier League status in a frantic end-of-season run-in.The Tigers head to Southampton on Saturday without a win in five games and perching just two points above the bottom three after wins last week for QPR and Leicester.And Bruce hopes the unpredictable nature of this season's top flight will continue into the final weeks, with the likes of Liverpool, Arsenal and Manchester United still due to visit the KC Stadium.Bruce said: "We have just witnessed over the last week all sorts of crazy results can happen and we need to make sure we get one or two of those, that's for sure."We've proved this year that we're capable but we're under no illusions how difficult it is going to be

It is all to play for and it is another big weekend but we have been saying that for the best part of four months."The way it's gone all season I wouldn't be surprised if it goes right down to the wire

Last week people were saying QPR and Leicester were gone but all of a sudden they've produced a result and they're back in it again."Bruce's biggest selection dilemma for the trip to the south coast is whether to keep faith in goalkeeper Allan McGregor after a pair of high-profile blunders in recent weeks.McGregor was at fault for the opening goal in the 3-1 defeat at Swansea last week and also made a mistake in the loss to Chelsea a fortnight ago, but Bruce sprung to the defence of the under-fire 33-year-old.Bruce said: "When you're a goalkeeper the one thing the Premier League does is highlight mistakes and unfortunately Allan will be the first to admit he has been disappointed over the last couple of weeks."I haven't made a decision one way or the other, but Allan is a very, very good goalkeeper

Despite his mistakes he is still a top-class keeper."Veteran Steve Harper is pushing to replace McGregor in Bruce's starting line-up while midfielder Tom Huddlestone is also set to make a welcome return from suspension.However David Meyler is ruled out after his red card last week, Gaston Ramirez is ineligible to play against his parent club and Curtis Davies is an injury doubt.And Bruce acknowledged his side face a major battle to boost their survival prospects against Koeman's high-flying Saints whom he rates as the best outside the traditional "big guns"."We will have to be somewhere near our best if we are going to get anything out of them because I rate them very highly," added Bruce."They lost three or four players for big money but they have bought well

They have maintained their position at the top end of the league so fair play to Ronald Koeman and the way the club is run from top to bottom."