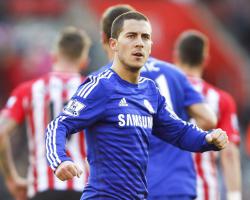 Southampton V Arsenal - view commentary, squad, and statistics of the game live.Koeman dismisses Mourinho claimsJose Mourinho was wrong to claim there is a "campaign" to influence referees' decisions against Chelsea, according to Southampton boss Ronald Koeman.Mourinho's former Barcelona coaching colleague Koeman believes there is no vendetta against Chelsea from the Blues' Premier League rivals.Stamford Bridge chief Mourinho was furious Chelsea were denied a penalty in the dying stages of Sunday's 1-1 draw at Southampton, with referee Anthony Taylor instead booking Cesc Fabregas for diving.Saints boss Koeman admitted Chelsea deserved a penalty for Matt Targett's challenge on Fabregas, but rejected Mourinho's complaints the Blues' rivals try to influence refereeing decisions."It's his feeling, I can't say anything about that, but I don't think so," said Koeman."I think referees are human people, everybody makes mistakes."And I think at the end of the season it's a little bit in balance."I don't think teams are more punished by the referee than the rest of the teams."It was a bad mistake from the referee, because when I watched the game afterwards it was a 100 per cent penalty."But sometimes you get a penalty and sometimes you don't, that's part of the job."Mourinho vented frustrations after league leaders Chelsea were held to a draw at St Mary's, criticising referee Taylor's call."There is a campaign against Chelsea

I don't know why there is this campaign and I do not care," said the Blues boss.Koeman believes a panel to review refereeing decisions would only add further pressure on top-flight match officials."It's a difficult question: always we are talking a lot about the referees," he said."That makes more attention and more pressure to the referees, and I think that's not good."Saints host Arsenal on the south coast in Premier League action on New Year's Day, with goal difference currently keeping Koeman's men in fourth above Arsene Wenger's fifth-placed side.Koeman said lying above Arsenal in the table at the turn of the year "means nothing" in Saints' outside bid for Champions League qualification."For me it's not an obsession," said Koeman of the challenge for a top-four finish."I look more to how we play, and if we play in a system, develop the team organisation, then we will be in the first seven, eight teams in the league, because of those qualities we have, and we have shown them."But it's not an obsession, because I don't like to watch the table every weekend; it means nothing."Okay if it's before the last weekend of the season it's different."But it's only half the season."Tomorrow we have a difficult game and many more ahead."We have to keep doing what we are doing, and that's most important, game by game."Meanwhile, Wenger remains confident 2015 can turn out to be a vintage year for Arsenal.The rejuvenated Gunners head to Southampton having taken 10 points from the Christmas schedule and on the back of just one defeat out of nine games in all competitions.Arsenal, who have a doubt over forward Danny Welbeck because of a thigh problem, hope to have the likes of Mesut Ozil, Aaron Ramsey, Mikel Arteta and eventually Jack Wilshere all fit again in the first quarter of 2015, which Wenger feels will give his squad an opportunity to deliver the consistent performances needed."I believe that there is a deficit between the potential we have shown and the number of points we have, that is what we want to get right," said Wenger, whose side begin their FA Cup defence against Hull on Sunday."Now it is time to catch back the points that we lost now until the end of the season."I feel we were very, very unlucky with the injuries we got, but with the number of injuries we have had, we have survived quite well."I feel it is nearly impossible that we will have the same bad luck on the injury front that we had in 2014."I believe that hopefully in the second part of the season, we will have more stability, especially defensively, to be more consistent."Arsenal's battling 2-1 win at West Ham on December 28 saw them claw back two points on both leaders Chelsea and Manchester City.While a late title surge looks unlikely, Wenger is determined to stay positive."We will fight to be as close as possible [to the top]," he said."You give your best and if there is a weakness in front of you, you want to take advantage of it."I don't know if there will be any weakness in front of us, but what I know is that we can give our best until the end of the season to have a chance to do it."