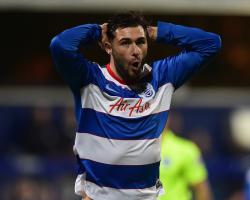 The 26-year-old was one of the stars of last season, but his 18-goal haul in his maiden top-flight season was not enough to help the west Londoners retain their Barclays Premier League status.

Austin had been widely expected to leave Loftus Road over the summer but remained after QPR stood firm on their ÃÂ£15million valuation of the forward, whose contract expired at the end of the season.

However, the Hoops this week accepted what Press Association Sport understands to be a ÃÂ£4million deal for the striker, which was announced by the south coast club on Saturday lunchtime.

Austin, who was called up by England for the first time at the end of last season, has penned a four-and-a-half-year deal at St Mary's.

"I'm delighted to have got it over the line so soon into January," he told the club's official website, www.saintsfc.co.uk

"I can't wait to get started now.

"As soon as Southampton showed an interest, that was the one club I wanted to go to.

"You see the progression from when I was playing against Southampton for Swindon.

"For me, it was important to come to a club that's on the up and that's what I've got here."

Former bricklayer Austin has only been in the professional game since 2009, when his fine form with Wessex League part-timers Poole Town earned a move to Swindon.

The striker continued to find the net and moved onto Burnley before then joining QPR, where he became a fans' favourite with 48 goals in 89 appearances.

Austin, who has been out for the past month with a hamstring complaint, has scored 10 goals in 16 appearances this term and leaves Loftus Road with QPR director of football Les Ferdinand's best wishes.

"It's no secret that Charlie is out of contract in the summer so this is a decision made in the best financial interests of the club," he said.

"Charlie has had a significant impact on this football club in his time here and we are hugely grateful to him for his contribution during his spell with us.

"Whilst we are sorry to lose Charlie, once he expressed an interest in moving to Southampton, we could not stand in his way.''